On The Fast Track 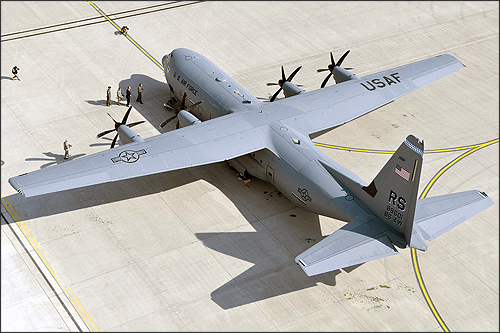 The 37th Airlift Squadron at Ramstein AB, Germany, is the only permanently assigned us tactical airlift squadron in Europe. If there is an airlift need in Europe, Africa, or even western Asia, the 37th, known as the Blue Tail Flies, is usually the first squadron to be called.

The unit's operational tempo is very high, as it has been for years. Among many 2008 highlights, squadron crews flew 211 tons of humanitarian aid on ninety-four sorties to the Republic of Georgia after that country was invaded; moved forty-five tons of supplies to support the standup of the United States's newly established Africa Command; evacuated US citizens from Lebanon; trained Romanian C-130 aircrews; instructed South African Hercules crews in night-vision goggle operations; dropped nearly 16,000 paratroopers during NATO exercises; and led the effort to introduce the Joint Precision Airdrop System in Europe. Last year, the 37th also participated in re-enactments of the World War II D-Day and Operation Market Garden airdrops.

And all of those missions were carried out on C-130E transports that are, on average, forty-two years old. In March 2007, the Air Force made the decision to equip the 37th with new C-130Js. However, with a squadron as heavily tasked as this one is, simply having the Blue Tail Flies stop flying and then convert to the Super Hercules was not a viable option for Air Force and NATO planners.

"We're in a unique situation," says Lt. Col. Mark August, commander of the 37th. "We are converting to a new aircraft, but at the same time, we have to keep flying and supporting combat missions. When we started this transition, we knew we'd have to do it all without standing the squadron down."

The 37th, whose lineage dates back to 1942, will receive fourteen extended-fuselage C-130Js, with ten of the aircraft scheduled for delivery before the end of 2009. The remaining four aircraft will be delivered by May 2010. The first Super Hercules was delivered to Ramstein in ceremonies on 7 April, the fifty-fourth anniversary of the first flight of the first production C-130A.

The squadron's new flagship, flown by US Air Forces in Europe commander Gen. Roger Brady, made a spectacular entrance, cruising low over the base's brand-new 67,847-square foot, double-bay hangar that was designed to accommodate the longer C-130J. After landing, the new aircraft was met by a pair of base fire trucks that gave the Super Hercules a ceremonial hosing down. Brady taxied the C-130J in and parked it in front of the crowd of more than 2,000 people, which included NATO, USAFE, host 86th Airlift Wing officials, and local community leaders.

"Basically, every time we get a J, we'll retire at least one E," notes August. "We will be down to just two E-models by the late fall." Half of the squadron's sixteen C-130Es will be retired to the 309th Aerospace Maintenance and Regeneration Group at Davis-Monthan AFB, Arizona. Some of the other airframes will be sent to US Army bases where they will be used as ground trainers for paratroopers. A few aircraft, including the last E-model to come off the assembly line in 1972, will be transferred to the C-130 schoolhouse at Little Rock AFB, Arkansas, and continue in service.

"Even as the E-models draw down, we will still obviously need to keep enough qualified crews to continue to fly missions and deploy," says August. "But with the reduced crew requirement on the J-model, we will also need to work on finding good assignments for the E-model navigators and flight engineers. Our maintainers will also have to keep the E-models flying while facilitating the changeover to the C-130J."

"The hard part of the transition is that we are getting a lot of C-130Js quickly, but the crew pipeline is only so big," says Lt. Col. Craig Williams, director of operations for the 37th. "We sent an initial cadre of aircrew and loadmasters to Little Rock for transition training last fall. With the delivery of our first new aircraft, we now have fourteen loadmasters and eight pilots qualified to fly the J-model. We wanted to be in a position that, when we get a new aircraft, we're able to use it." The 37th Airlift Squadron carried out its first C-130J training mission only two days after the first aircraft was delivered. The squadron's first J-model paratroop drop came on 7 May.

To help the Blue Tail Flies convert to the new aircraft, the 143rd Airlift Wing, the Rhode Island Air National Guard unit at Quonset Point, deployed aircrews and one of its C-130Js to Germany. For the six weeks prior to the arrival of Ramstein's first Super Hercules, J-qualified members of the 37th flew with the 143rd crews on missions, including flights to Bulgaria and Italy. "The Rhode Island Guard has really helped us," notes August. "We got experience in operations, and our maintainers received hands-on experience with the C-130J as well."

"We originally thought it would take eighteen months to complete this transition," says Williams. "But we have all the pieces in place that we need to pull the squadron together and make this switch happen. And it will happen in thirteen months."