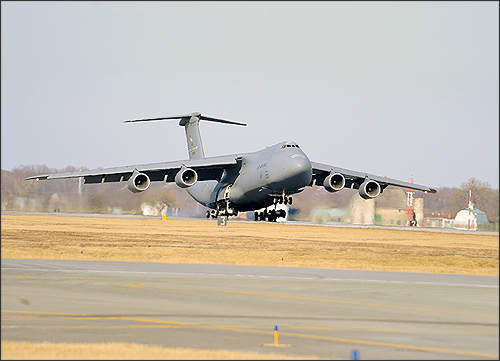 With Gen. Art Lichte, commander of Air Mobility Command, at the controls, the first C-5M Super Galaxy touched down at Dover AFB, Delaware, on 9 February to begin a new chapter in C-5 operations.

Lichte was joined on the delivery flight by John Young, Undersecretary of Defense for Acquisition, Technology, and Logistics, and by Sue Payton, Assistant Secretary of the Air Force for Acquisition. A flight crew consisting of Team Dover members from both the active duty 436th Airlift Wing and Air Force Reserve Command's 512th Airlift Wing flew the aircraft from Lockheed Martin in Marietta, Georgia, to Dover.

A host of dignitaries, including Lt. Gen. Charles Stenner, Chief of the Air Force Reserve; the entire Delaware Congressional delegation; and local civic leaders looked on as the fully modernized C-5M, nicknamed Spirit of Global Reach, was taxied in. Greeting the aircraft were four members of the now-retired crew that had delivered the first C-5A to Dover nearly thirty-eight years ago.

In his remarks, Col. Manson Morris, commander of the 512th AW, noted, "Today we see the fruits of a long-term effort by thousands of personnel to develop an airlifter with greater strategic capability than any of its predecessors."

The Super Galaxy is the result of the two-phase C-5 modernization effort. The first phase is the ongoing Avionics Modernization Program, or AMP, that is more than forty percent completed. All 111 aircraft in the C-5 fleet are scheduled to receive the AMP modifications, with deliveries completed in 2014. AMP provides new glass cockpit displays and a digital backbone to support the second phase of the C-5 upgrade, the Reliability Enhancement and Re-engining Program, or RERP. Once a C-5 receives both the AMP and RERP upgrades, the aircraft is redesignated C-5M.

AMP reached initial operational capability with the Air Force in February 2007. As of February 2009, the AMP-modified C-5s have logged more than 50,000 operational flight hours on missions around the world. AMP installations are being completed on two separate modification lines, one at Dover and one at Travis AFB, California. The last AMP-modified C-5B is scheduled to be redelivered in September 2009.

Developmental flight testing on the three C-5M test aircraft was completed on 16 August 2008 after a two-year flight test program. The 403-flight, 1,037-flight-hour test program included verification of the more than seventy performance and reliability enhancements to the aircraft's new utilities and subsystems, flight controls, airframe, and propulsion system. Flight testing took place in Marietta; at the Air Force Flight Test Center at Edwards AFB, California; in Yuma, Arizona; and at other sites. All of the flight test equipment and associated wiring was removed from the C-5s once testing was complete.

The major RERP upgrade is the installation of the GE Aviation Aircraft Engines CF6-80C2 commercial engines. These 60,000-pound thrust engines, given the military designation of F108-GE-100, are de-rated to 50,000 pounds thrust on the C-5M. During the system design and development phase of the program, the Super Galaxy propulsion system averaged more than seven times better than the legacy engines in terms of both mean time between maintenance actions and mean time between individual part failures. The C-5M also meets Federal Aviation Administration Stage 3 noise requirements — more than ten decibels quieter than the requirement — and emissions standards as well.

During her remarks at the ceremony, Payton highlighted one of the two international missions the C-5M test team carried out earlier this year. Taking off from Travis at a gross weight of 865,000 pounds, the C-5M crew lifted off in 5,000 feet, climbed to 30,000 feet in less than twenty-five minutes, and then flew eleven hours nonstop and unrefueled over the North Pole to RAF Mildenhall, England. She concluded by noting that, "The delivery of the C-5M is a huge, significant step forward bringing increased capability to the warfighter."

The first C-5 to be inducted into the production M-model modification line will be flown to Marietta in August. That aircraft will be redelivered in mid 2010. Low-rate production will continue through 2013, with three aircraft delivered in 2011, five in 2012, and seven in 2013. A total of fifty-two of the 111 aircraft in the C-5 fleet are currently scheduled to be brought up to C-5M standard. The final thirty-three aircraft will be redelivered at a rate of eleven per year from 2014 to 2016.

A second C-5M, nicknamed Spirit of Normandy, was delivered to Dover on 27 February. Aircrews and maintainers from both the 436th and 512th Airlift Wings will spend the next several months familiarizing themselves with their new aircraft and flying operational missions. Seven aircrews and close to 100 maintainers have already been trained on the C-5M. "We are going to fly the aircraft and see exactly what its capabilities are," said CMSgt. Don Cunningham, one of the C-5M initial aircrew cadre.

Both of the C-5Ms now at Dover are former C-5B aircraft. The third Super Galaxy, a former C-5A aircraft, is currently in depot maintenance at Robins AFB, Georgia. It will be flown to Dover later this year. All three C-5Ms will be flown during Air Force Operational Test and Evaluation, a critical evaluation of the C-5M's ability to carry out its mission, which is scheduled to begin in October 2009 and run through the first quarter of 2010.