Viper U At NAS Fallon 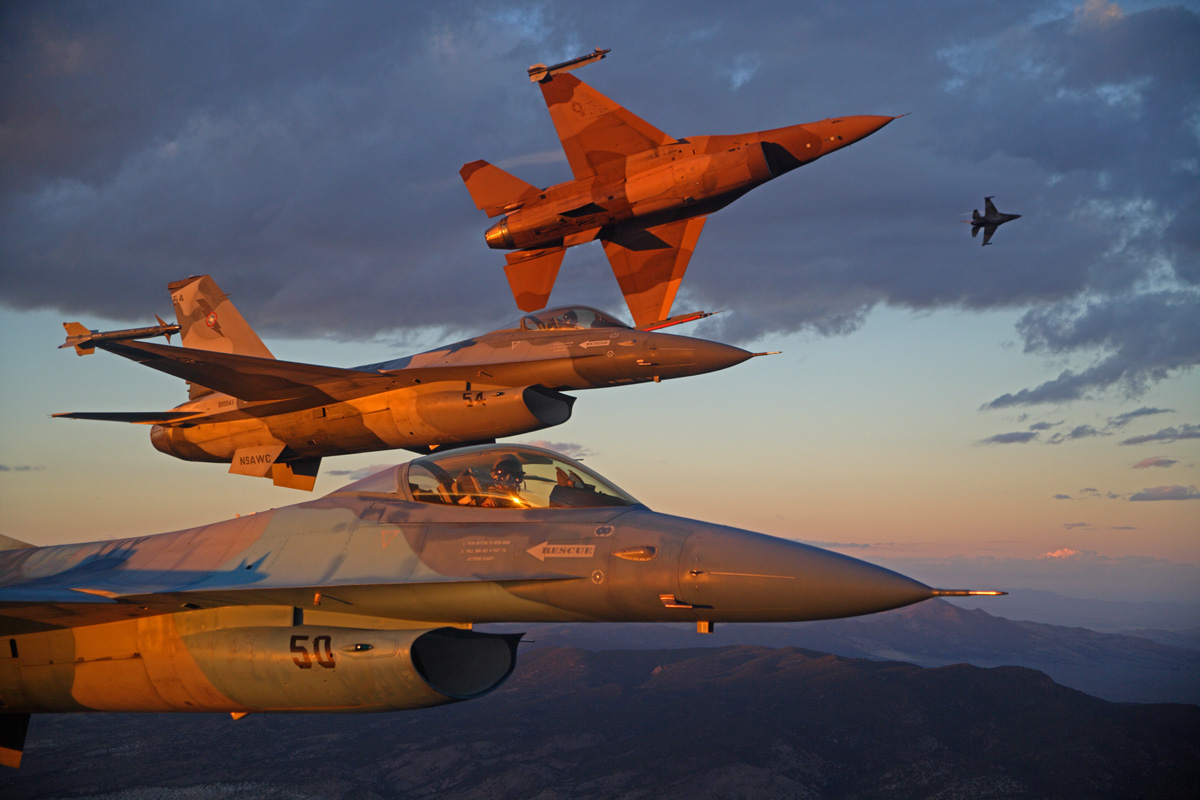 Lt. Winston Scott, an experienced Naval aviator with more than 900 hours in the F/A-18C, smiles as he climbs down from his F-16 Fighting Falcon. Scott has just completed his first solo flight in a Navy F-16. "That was fantastic," he says. "The agility is outstanding, but I am most impressed with the airplane's thrust-to-weight ratio."

Scott's first solo flight was his fourth sortie in an F-16. He flew his first three sorties in the front seat of a two-seat F-16B with a Navy instructor pilot in the back seat. He will complete several more flights, about ten hours total flying time, before he is officially certified by the Navy as an F-16 pilot. The training is the first step in turning Scott and several other pilots into adversary pilots for the Naval Strike and Air Warfare Center at NAS Fallon, Nevada.

"We call the training Viper U," explains Cdr. Victor Weber, operations officer at NSAWC. "Some call it Viper Vo-Tech," he quips.

The US Navy has been flying F-16s at NAS Fallon since early 2002 when the first of fourteen F-16s arrived (ten single-seat and four two-seat versions). The aircraft, with distinctive paint schemes, are low-hour Block 15 F-16s taken from desert storage at Davis-Monthan AFB, Arizona, and restored to flying condition at the Aerospace Maintenance and Regeneration Center at Davis-Monthan. These F-16s are often confused with the Block 30 F-16Ns the US Navy operated at several locations beginning in 1987. Those F-16Ns were retired in 1995. Between 1995 and 2002, F/A-18s and F-5s flew the adversary role. They are still flown today as adversaries at NAS Fallon.

Initially, Navy pilots received their F-16 conversion training in Tucson from the 162nd Fighter Wing, the Arizona Air National Guard unit. About two years ago, several of the NSAWC pilots took the initiative to move most of the conversion training to Fallon. The move saved time and money for the Navy and allowed the 162nd to concentrate on its primary mission of training international F-16 pilots.

"We base our program on the Air Force syllabus," notes Weber, who was instrumental in bringing the conversion training to Fallon. "We still send pilots to Tucson to train in the F-16 simulators there, but we do all the actual flying and the other ground instruction here. The Navy did its own conversion training when it operated the F-16N."

About thirty Navy pilots are qualified to fly the adversary role in the F-16, an assignment that lasts two years at Fallon. The Navy replenishes pilots for the role by conducting four F-16 conversion classes with four students per class every year. Once the Navy pilots are qualified in the F-16, they go through another seven weeks of training to learn to fly the Fighting Falcon in the adversary role. After that, they are ready to function as adversary pilots at NSAWC.

"NSAWC is widely recognized as the premier aviation center of excellence and the primary authority on training and tactics development for the US Navy," explains Capt. Eamon Matthew Storrs, deputy commander of NSAWC.

This designation as the center of excellence carries an assortment of responsibilities. NSAWC personnel train pilots and ground personnel, assess the results of that training, and recommend requirements for future training programs. They research and develop priorities for integrated strike warfare, maritime and land air superiority, strike fighter employment, airborne battle management, combat search and rescue, close air support, and associated planning and support systems. They also develop, implement, and administer several courses of instruction. In addition, NSAWC personnel function as the Navy point of contact for all issues relating to the Navy's air combat training curriculum.

The huge ranges near Fallon are perfect for training on a large scale. The area has more than 300 clear flying days per year. The operating area encompasses 10,200 square miles east of Fallon and features a 14,000-foot runway (the longest in the Navy), four bombing ranges, and an electronic warfare range.

"The range alone distinguishes us as the crown jewel of aviation training for the Navy," Storrs says. "It is vast enough to conduct a full-scale air wing rehearsal. We can launch a full-up strike package of forty aircraft and put up as many as twenty of our own aircraft at the same time."

The Fallon range training complex includes an array of electronic systems that support the various types of training. The heart of this system, called the advanced digital display system, allows each training event to be displayed and recorded as it occurs on the ranges. Information transmits instantaneously from each aircraft to large-screen displays at NSAWC and records for playback for post-flight analysis of procedures and tactics. This system also allows controllers and aircrews to view an event in three dimensions from different perspectives.

"We can review frame by frame what went on in every encounter and ask everyone what was going on in the cockpit," notes Storrs. "Aircrews learn more during these detailed reviews than from the actual missions."

A carrier air wing comes to Fallon four or more times a year for carrier air wing training, a four-week course to prepare the wing for its first deployment as a fighting unit. These visits bring as many as eighty aircraft and approximately 2,000 people to the base.

The training starts with a strike leader advanced training course with strike leads nominated by the squadrons. These strike leads are put through academics on evaluating threats, putting together strike packages, and using reconnaissance and other assets. At the same time, other members of the squadron become familiar with the area, the local targets, and the range boundaries.

As the training progresses, aircrews are introduced to various potential threats. They fly prescribed missions against basic threats and then thoroughly debrief the missions. The number of threats and the size of the strike packages increase during the training. In the final week, the advanced training phase, the aircrews essentially conduct a two-day simulated war.

"They start the week with a given number of aircraft and personnel," Storrs notes. "If they lose an aircraft in an engagement, they can't use that aircraft for the remainder of the war.

"Air Wing Fallon is the best operational training that a squadron ever receives," Storrs continues. "Once the squadrons leave here, they go back to typical operations from a ship. Twenty-five to fifty percent of their time is spent concentrating on taking off and landing on the ship. Here, they can drop all that extra operational baggage and concentrate thoroughly on tactics."

Ground crews benefit from the training as well. "They become more skilled at getting the aircraft prepared for combat and tweaking the electronic warning systems," Storrs says. "They work on the turnaround times here they will experience on the ship in combat. The whole team comes together at Fallon. The team becomes proficient here."

SFTI, or Top Gun, training is still widely perceived as addressing air-to-air tactics only. The curriculum changed in the early 1990s to include air-to-ground tactics. The ten-week course graduates strike fighter tactics instructors who return to fighter squadrons to train fellow aircrews in air-to-air and air-to-ground tactics. An SFTI graduate is roughly equivalent to a US Air Force weapon system officer.

Students selected for the course come from the most highly rated aircrews who have completed their first fleet tour and have accumulated 1,000 or so hours of flight time. Top Gun instructors at NSAWC conduct about five of these courses every year. The coursework begins with a week of academics and builds from one-vs.-one air combat, to small strike packages against unknown threats, to large strike packages involving all students and all instructors.

"Top Gun also helps standardize tactics so that every squadron is working from the same sheet of music," explains Storrs. "For example, we recently gave two months' notice to an F/A-18 squadron from Beaufort, South Carolina, on the East coast to deploy to a carrier air wing based on the West coast. We made the substitution without a hiccup. We couldn't do that back in the 1980s because tactics varied from squadron to squadron. The tactics were similar, but not nearly as standardized as they are now."

Fighting Falcons at Fallon are playing a critical role in ensuring the continued success of NSAWC. "The F-16 has been very reliable for us," says Storrs, who has accumulated some F-16 time himself. "We can generate a lot of sorties with this aircraft. Briefing times and manpower are the limiting factors, not aircraft availability. We could fly these airplanes all day if we didn't have to brief and debrief. Most of all, the F-16 gives us the fourth-generation threat we need in our training."

"We employ realistic threat tactics with our F-16s," adds Cdr. Brad Blackwelder, assistant operations officer who is also in charge of the F-16 program at NSAWC. "That means we are handcuffed by limits we place on our radar and by the types of shots we take as Red Air. But at a merge, we fight our best fight.

"Performing as adversaries, our job, as Red Air, is to die. And we do that often," continues Blackwelder, who, with just over 300 F-16 hours, is the high-hour Viper pilot at Fallon. "Every Blue platform should beat us. They have bigger sticks in terms of radar ranges and weapons. But we fight as hard as we can within the limits they give us."

Getting to fly the F-16 is considered a bonus for Navy instructors at NSAWC. "An aviator in the regular Navy pipeline would never get that experience," says Storrs. "It is one of the few rewards instructors get for coming here and working their tails off."

NSAWC adversary pilots explain the rewards in various terms. "Pilots experience Viper euphoria when they get qualified in this jet," says Blackwelder. "The aircraft is so different from what they have been flying their previous 1,000 to 2,000 hours. For a guy who enjoys flying jets, the F-16 offers a unique experience."

"We fly in the best possible configuration for the F-16 — completely slick," adds Weber. "No drop tanks. No pods. No bombs. Just AIM-9s on the wingtips. Pilots are like King Kong in this airplane. Most Air Force F-16 pilots would envy the way we get to fly these airplanes."

The rewards, however, carry some real-world benefits for the pilots going through training at NSAWC. "An F-18 pilot can get away with things against another F-18 that he cannot get away with flying against an F-16," Blackwelder says. "I ran a guy down in two or three minutes when he was twenty miles away. The top-end speed on the F-16 allows me to make an intercept."

One of the more exciting intercept missions the NSAWC adversary pilots perform is airfield protection. "We call it a DLI, for deck-launched interceptor mission," Blackwelder explains. "We act as if we are on alert. When we get notice of an attack, we head down a supersonic corridor to intercept Blue forces. Things happen fast. We are supersonic almost from the moment the wheels are in the well. Students look at their radar displays and see a threat aircraft closing in on them. That's an invaluable experience. Students leave here and do business differently."

Weber looks over at Scott, who is still recovering from his first F-16 solo. "You're going to love those missions," he laughs. "They are retention sorties."