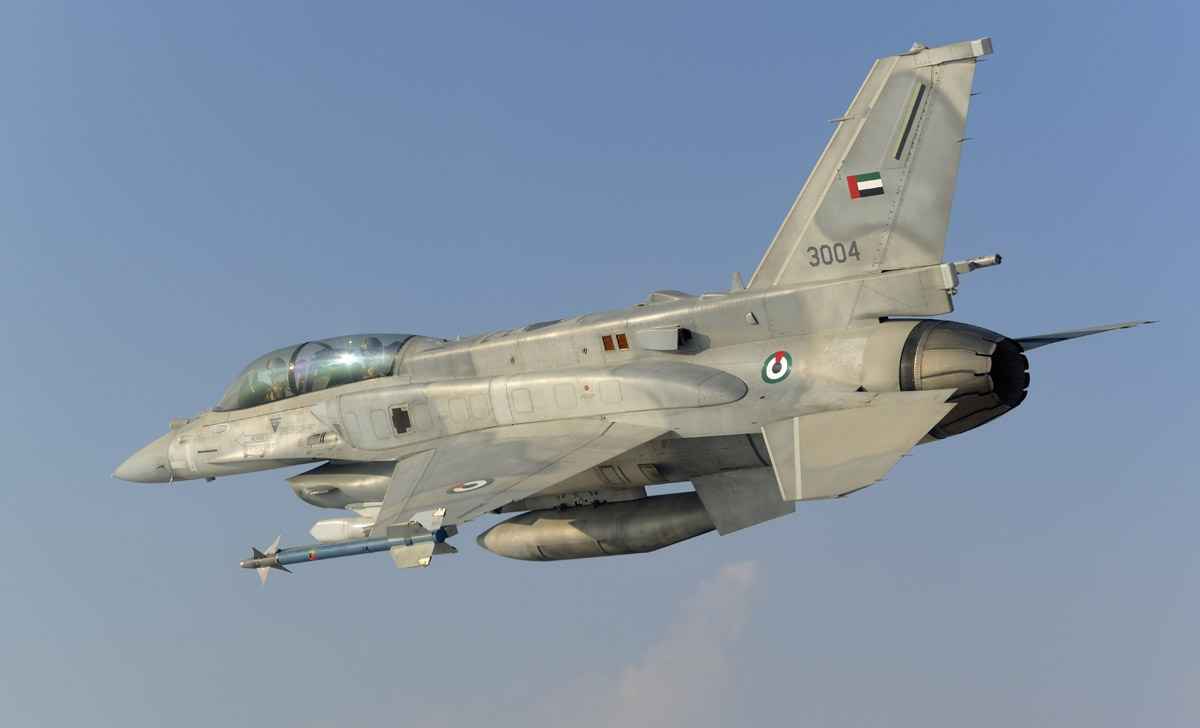 The first ten Block 60 F-16s arrived in the United Arab Emirates in grand style on 3 May 2005 to a waiting crowd of government leaders, military officers, and distinguished guests. UAE Air Force pilots trained in the United States performed two passes in tight five-ship formations, landed one by one, taxied past rows of UAE flags, and parked in front of the large review stand at their new home in the UAE. As the canopies popped open, applause supplanted engine noise, and one by one, the pilots climbed down, walked to the front of their new multirole fighters, and stood at attention.

Waiting to accept the new fighters into the UAE Air Force was General Sheikh Mohammed bin Zayed Al Nahyan, Crown Prince of Abu Dhabi and Deputy Supreme Commander of the UAE Armed Forces. "The delivery of the first installment of F-16 Block 60 combat aircraft today is a culmination of sustained efforts by the UAE to acquire a sophisticated combat aircraft responsive to the defense needs of the twenty-first century," he said.

"The capability of our armed forces will be significantly enhanced with this aircraft," continued Sheikh Mohammed. "This landmark event is not only a result of efforts by our political leadership to modernize our armed forces, but also a result of the dedication and tireless work by our uniformed men and women to carry out this modernization."

Sheikh Mohammed then praised the abilities demonstrated by the UAE pilots. "We thank God for the safe return of these young men, who are a source of pride for all of us. We highly value their remarkable performance. I have no doubt the UAE is teeming with young men and women capable of responding to a national call to serve their country. I'm also confident they have the ability to grasp the modern technology utilized by this advanced fighter."

US Ambassador to the UAE Michele Sison noted the delivery of the Block 60 F-16s represents the high level of cooperation between the United States and the United Arab Emirates. "The F-16 Block 60 cements our military relationship," she said. "The delivery of the aircraft and the associated training represent a significant step forward for our strategic relationship. Together we have worked hard to ensure that the UAE obtains a highly advanced aircraft to meet its security needs and to enhance our interoperability."

For Lockheed Martin Aeronautics Company, producer of the Block 60 F-16, the delivery represents the culmination of efforts of the Block 60 program team, which includes contractor, US Air Force, and UAE personnel.

"We are impressed by the expertise of the UAE Air Force representatives and are proud of our joint accomplishment in fielding this outstanding new fighter," said Ralph D. Heath, Lockheed Martin Corporation executive vice president for Aeronautics. "The beginning of operations with the Desert Falcon opens a new chapter in the F-16's long history of successful technology evolution and innovation. This new F-16 version is unmatched in a broad range of capabilities, from its powerplant to its self-defense electronics."

Following the arrival, Sheikh Mohammed and other officials were briefed on the capabilities of the Block 60 F-16, including its performance, armament, and operational characteristics. Sheikh Mohammed then congratulated the pilots and crew members, posing for photos with them.

The Block 60 aircraft, designated F-16E (single-seat) and F-16F (two-seat) aircraft, and nicknamed Desert Falcon, is the latest and most advanced version in the long line of F-16s to roll out the Lockheed Martin production plant in Fort Worth, Texas. The UAE has ordered eighty of these aircraft. This cell of ten aircraft is the first installment.

The F-16E/F was flown for the first time in December 2003. Flight testing began in early 2004 and continues with three F-16F models. UAE pilot training on the F-16E/F began at the 162nd Fighter Wing, the US Air National Guard unit charged with training international F-16 operators, at Tucson International Airport, Arizona, in September 2001. The first group of UAE pilots completed training in April 2005.