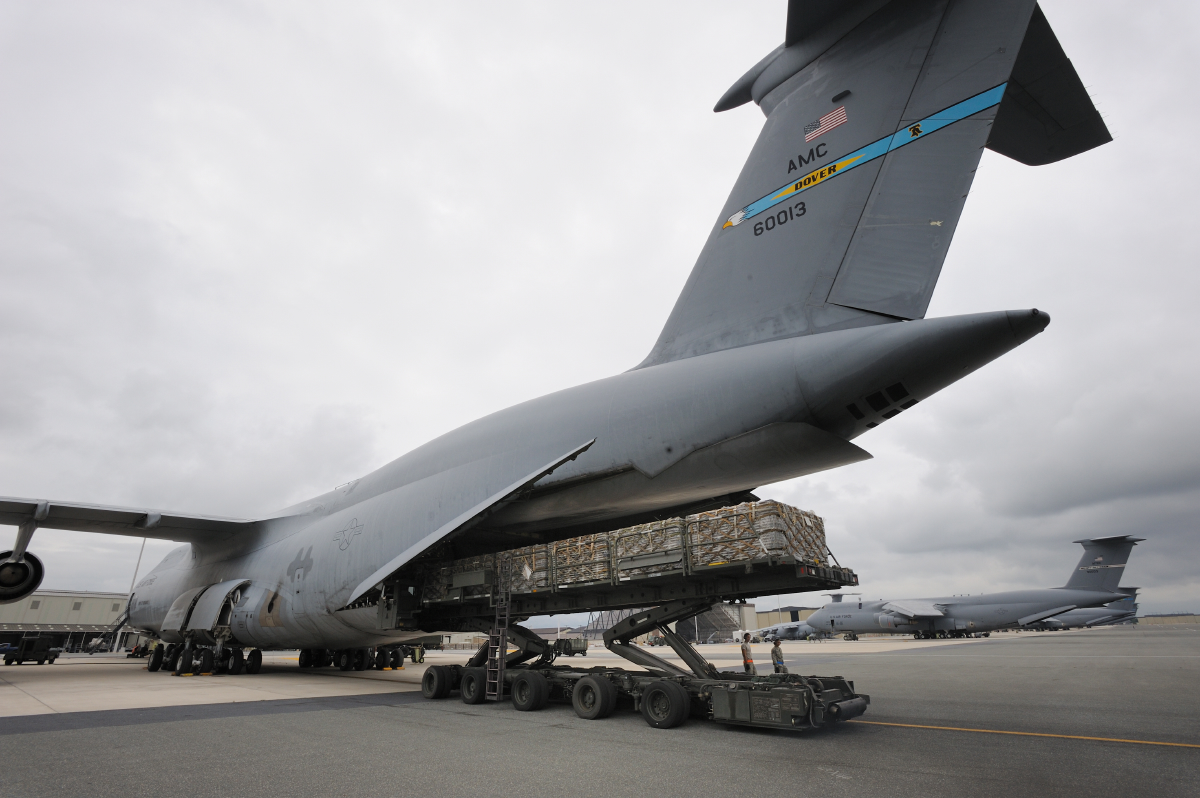 The fall of 2009 was one for the record books for the C-5M Super Galaxy strategic transport. In September, a joint US Air Force and Lockheed Martin flight crew set forty-one world aeronautical records on a single flight from Dover AFB, Delaware. And in November, an Air Force Reserve Command crew set a speed over a closed course record flying from Dover to Turkey.

The early morning flight on 13 September broke eight existing world records and established marks in thirty-three other categories where there had been no previous record attempt. The records were set in the Class C-1.S, Jet category for altitude in horizontal flight; altitude with payload; time to climb and, separately, time to climb with payload; and greatest payload to 2,000 meters.

These records demonstrate the C-5M’s ability to quickly get out of harm’s way and fly at operational altitudes, all with a payload heavier than any other US airlifter can carry.

The new altitude in horizontal flight record broke the mark set by a Russian crew in a Tupolev Tu-160 bomber in 1989. The other records were set in 1993 by crews flying a C-17 airlifter.

Planning and coordination for the record flight took several months. Because this was a mass-to-altitude flight, each component—the aircraft, the payload, the fuel, and even the crew and their personal equipment—had to be carefully weighed beforehand. Kris Maynard, an observer with National Aeronautic Association, the nation’s oldest aviation organization, supervised the weigh-in. The NAA is the US representative to the Fédération Aéronautique Internationale, or FAI, the sanctioning body for all world aviation records.

As can be imagined, weighing a C-5 is not an easy task. The C-5M, Air Force serial number 86-0013 and nicknamed Spirit of Normandy, was towed into a hangar, and scales were set up under each landing gear bogie. Calculating the weight of the C-5M took the better part of a day.

Next, the payload was weighed. The 176,610-pound payload consisted of twenty-nine standard 463L military pallets with additional pallets stacked and strapped down on top of them. Each pallet of pallets had to be individually weighed on the scales at Dover’s aerial port squadron. All C-5s can carry thirty-six pallets.

Using a new drive-on/drive-off system, the fuel trucks were first weighed full and then weighed empty to calculate the total fuel weight put on the aircraft. After loading and fueling, the aircraft was sealed until the crew boarded for takeoff.

Lt. Col. Scott Erickson, the pilot on the flight and a Reservist with the 709th AS, noted there wasn’t a lot of conversation on the flight deck during the 1.6-hour flight. “The crew knew we had benchmarks to reach and was working quietly. We were watching the altimeter with one eye and the clock with the other. We shared the anticipation. We just wanted to make sure everything went smoothly. And it did.”

The forty-one records were certified as US national records by the NAA in December and as world marks by the FAI in January.

The forty-second record came on 6 November when an Air Force Reserve crew led by Lt. Col. Mark Alderson set a new speed over a recognized course record flying from Dover to Incirlik AB, Turkey, in 10 hours, 9 minutes. The aircraft took off at a weight of 807,581 pounds and delivered a payload of 115,781 pounds, nonstop and unrefueled. The record was set in the third C-5M (serial number 69-0024), a former C-5A. That record is expected to be certified in early 2010.

“Both of these flights were well within the normal capabilities of the aircraft,” noted Erickson. “There was nothing we did that was outside of what is in the technical manual. What we did can be done in the C-5M every day.”