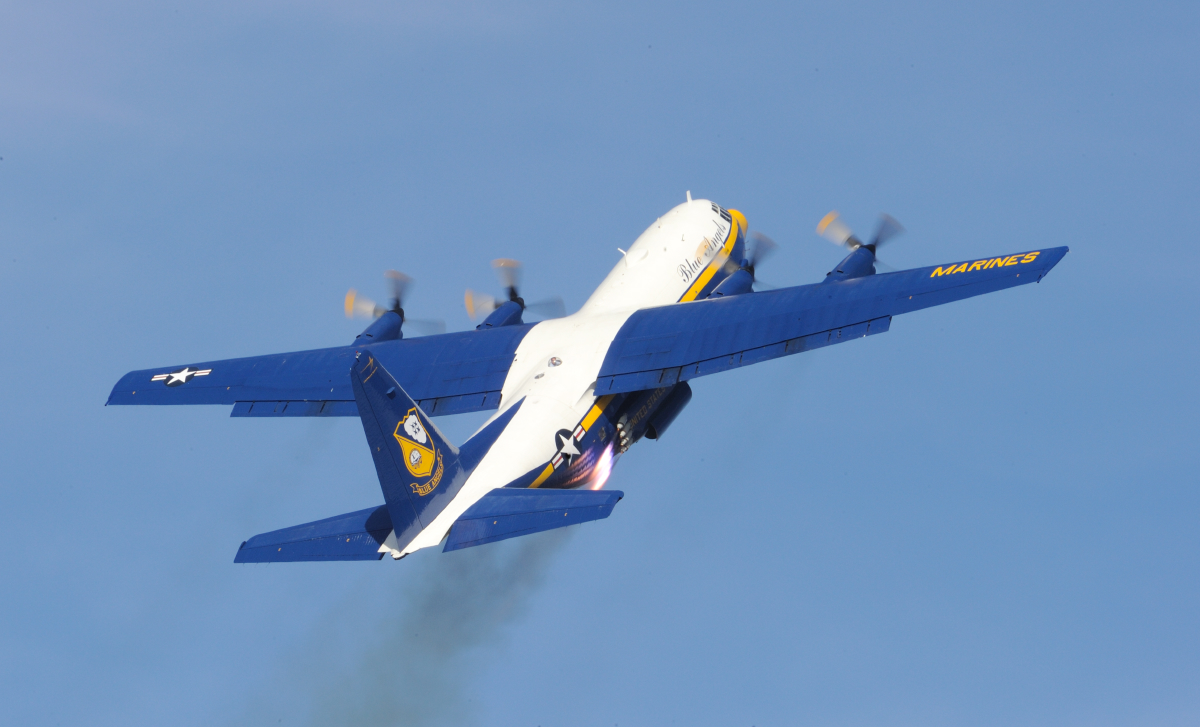 For nearly thirty years, almost every airshow presented by the Blue Angels, the US Navy’s Flight Demonstration Squadron, began with the team’s C-130 Hercules support aircraft making a fiery, smoky, noisy jet-assisted takeoff. That era came to an end on 14 November 2009 as the crew of Fat Albert, the affectionate nickname given to the team’s C-130, carried out the last-ever JATO blastoff.

“Our primary mission is to provide logistical support for the Blue Angels,” said Maj. Brendan Burks, Fat Albert’s lead pilot in 2010. “We fly approximately 35,000 pounds of spares, tools, and equipment and thirty to forty maintainers to the show sites during the season. We fly close to 100,000 miles each year.” The Blue Angels typically fly twice at each of the approximately thirty-five show sites where they appear during the average show season, which runs from March to November.

“Our secondary mission is to show the max capabilities of the C-130,” Burks adds. “We fly the aircraft to its limits. The primary task of this squadron, after all, is to enhance the image of Naval aviation to the American public through our flying and civic outreach.” The team performs in front of approximately 15 million people each year.

But the Hercules wasn’t always a part of the show. In 1969, the Blues switched show jets from the F-11A Tiger to the larger, faster F-4J Phantom II. If a spare engine was needed at a show site, the team’s C-121 Constellation support aircraft could not carry the F-4’s huge J79 jet engine. So the C-130, which could, was assigned to the team in 1970.

In exchange for the Marines offering up a non-tanker C-130F as a dedicated support aircraft, the Commandant of the US Marine Corps at the time, Gen. Leonard Chapman, directed that the aircraft would be crewed by Marines. Fat Albert flies with three pilots and five enlisted crew members—two flight engineers, a navigator, a loadmaster, and a flight mechanic. The enlisted crew members are all cross-trained and also maintain the aircraft.

“At the beginning, the C-130 crew was considered a Marine detachment to the Blue Angels,” notes Phil Brooks, who, as a Marine captain, flew Fat Albert from 1976–78. “They weren’t even part of the team. It was just a Marine Corps aircraft painted white with ‘Blue Angels’ painted on the side. The Navy and the Marine Corps have really come together.”

Shortly after it premiered in 1972, Fat Albert and the Cosby Kids, an animated Saturday morning cartoon show, became a huge hit. “We don’t know the exact date, but a little kid saw the big C-130 slowly taxi in at an airshow and said it looked like Fat Albert,” notes Burks. “And the name stuck.” Team members shortened the nickname to just Bert and collectively call themselves Bert Boys.

“We have our own fan base,” adds Capt. Edward Jorge, Fat Albert’s second pilot in 2010. “Kids everywhere love Bert. It’s big and bright. It’s a friendly looking airplane.” One former Bert pilot noted that when he was on the team, many of the children of the Blue Angel jet pilots actually liked Bert better than the aircraft their fathers flew.

The Blue Angels traditionally end the show season at NAS Pensacola, Florida, their home base. Near the end of the 1975 season, then-Capts. Steve Petit and Ron Fleming decided they wanted to include Fat Albert in the annual homecoming show.

Recalls Petit: “We walked into the Boss’ [Blue Angels leader/commander] office and said, ‘We want to be in the airshow,’ and he said, ‘What can you do?’ So we said we could put JATO bottles on Albert and light them off and climb up rapidly. Walking out of his office, I asked Ron, ‘How do you do one of these JATO launches?’ We had no idea.”

Developed at Cal Tech under the direction of legendary aerodynamicist Theodore von Kármán, the first JATO test launch came in 1941. During the Vietnam War, the bottles were used regularly to get C-130s airborne in minimal time and distance to escape ground threats.

The only guidance Petit and Fleming could find on JATO was two pages of instructions in the Naval Aviation Training and Operations, or NATOPS, manual. Eight JATO bottles were shipped down from the Naval Air Test Center at NAS Patuxent River, Maryland, and were attached to Fat Albert on 12 November 1975, the day of the final show that year. The team performed no practice runs.

“We fired the bottles, climbed out at show center, and the crowd went nuts. We circled and landed. I looked at Ron and said, ‘Well, that was fun.’ That was it,” says Petit, whose last military assignment was as the Fat Albert pilot. He later had a thirty-year career as a captain with American Airlines.

However, it appeared that first JATO launch was only a one-time spectacle. For several years after the first blastoff, officials at Pensacola had no interest in storing the bottles, which require special handling and procedures. But a memorable impression had been made.

Popular demand brought the flames and noise back, and, by the early 1980s, the Fat Albert crew was carrying out JATO launches at nearly every practice and at most shows. This has continued with the three C-130Fs, the TC-130G, and the current C-130T that have served as Fat Albert. “The JATO launch became a trademark for us,” observed Jorge. “It’s a great wow factor for the crowd.”

“The demo has greatly expanded since that first takeoff and landing. We now have an eleven-minute show that shows the capability of the C-130,” notes Maj. Drew Hess, who completed his three-year tour in 2009 as the lead Fat Albert pilot. “For a long time, the show started with the JATO launch.”

The eight solid rocket bottles weigh about 150 pounds each full and produce about 1,000 pounds of thrust. They provide the equivalent power of a fifth engine to the Hercules. Igniters are threaded into the top of the bottles and are linked via a simple electrical connection to a button on the flight engineer’s panel in the cockpit.

“On takeoff, we release brakes and pick up speed. Near show center, the flight engineer pushes the magic button,” Hess notes. “The rockets go off with a big pop and a lot of smoke and flames,” adds GySgt. Donny Pharr, who also completed his tour on Bert in 2009. The aircraft takes off at a forty-five degree angle and reaches 1,200 feet in about eleven seconds.

As the bottles are expended, the aircraft noses over, and the crew and the twenty to thirty passengers on each flight—local civic leaders, recruiters, and other VIPs generally—briefly experience negative g. The loadmasters, who are not strapped in, grab something solid like a door frame and take great pleasure in simply floating up.

After a series of turns, the C-130 crew repositions and makes a parade pass at a sixty-degree bank angle in front of the crowd. Another series of turns and Bert comes back for a flat pass at 370 mph at sixty feet off the ground. “We always use miles per hour instead of knots because it sounds faster,” quips Hess.

The flat pass is followed by a minimum-radius turn in front of the crowd. The crew then gains altitude and sets up on the downwind leg for an assault landing. Approaching the runway, the crew pushes the nose over at a twenty-eight degree nose-down attitude, makes a maximum effort landing, and stops in 1,200 feet. The crew concludes the show by putting the engines in full reverse and backing up—to cheers from the show crowd.

“We have a lot of crew interaction,” says Hess, who has now returned to the operational Marine Corps fleet flying KC-130J tankers. “Our demo is a textbook example of crew resource management. The demo requires constant communication between the pilot, copilot, and flight engineer. We all support each other. The Navy’s safety school has even sent observers to watch us work.”

The development of higher performance engines over the last several decades has eliminated the need for JATO launches in the wider C-130 fleet. The non-operational nature of the JATO launch was a contributing factor, but costs—storage, handling, and operations with the bottles—were becoming prohibitive. However, the main issue that spelled the end to the Fat Albert JATO takeoffs was the fact that the Navy was running out of the bottles.

“The last bottles were cast shortly after the end of the Vietnam War,” Pharr notes. “The remaining bottles had to be X-rayed every year to make sure the solid fuel was still intact, and a number of bottles were failing inspection. We have been rationing the bottles for the last several years. Because the bottles were also considered armament, they had to be shipped separately to the show sites.”

Nearly two dozen former Bert Boys returned to NAS Pensacola to fly as passengers on Bert’s last blast in November. Many were retired, but a couple of the former crew members now command KC-130J squadrons. The last flight also included current Blue Angel enlisted personnel who were completing their tour with the team as well as a couple of what the Bert crew calls JATO Dogs—current team members who act as safety observers during the demo as recognition for their good work.

On command, Pharr fired the JATO bottles for the last blast. Shouts of “one more time, one more time” could be heard as Hess, making his last flight on Fat Albert, taxied off the active runway at the end of the demo. The appreciative crowd of about 100,000 people roared their approval.

After landing, each member of the current Bert crew signed the used JATO bottles as did Petit. The Fat Albert JATO launch had passed into history, and the empty bottles were enshrined in the National Museum of Naval Aviation just down the ramp from the Blue Angel hangar at Pensacola. By tradition, the two Marines rotating off the 2009 Fat Albert crew were presented specially painted and decorated JATO bottles.

“It would be great if the JATO launches could continue,” said Brooks. “It was a great era. But it has passed. The Marine Corps has gotten a lot of good press out of Fat Albert. Marine aviation, in the form of this C-130, will continue to be an integral part of the Blue Angels.”

The Navy’s long-term aircraft recapitalization plan calls for replacing the current Fat Albert with a C-130J, but that is several years away. For now, the Fat Albert crew will continue to lead off Blue Angels shows, creating goodwill and demonstrating the capabilities of the C-130. But as the Bert pilots all noted, “We won’t have JATO, but we have some great ideas on how we’re going to start the show this year.”