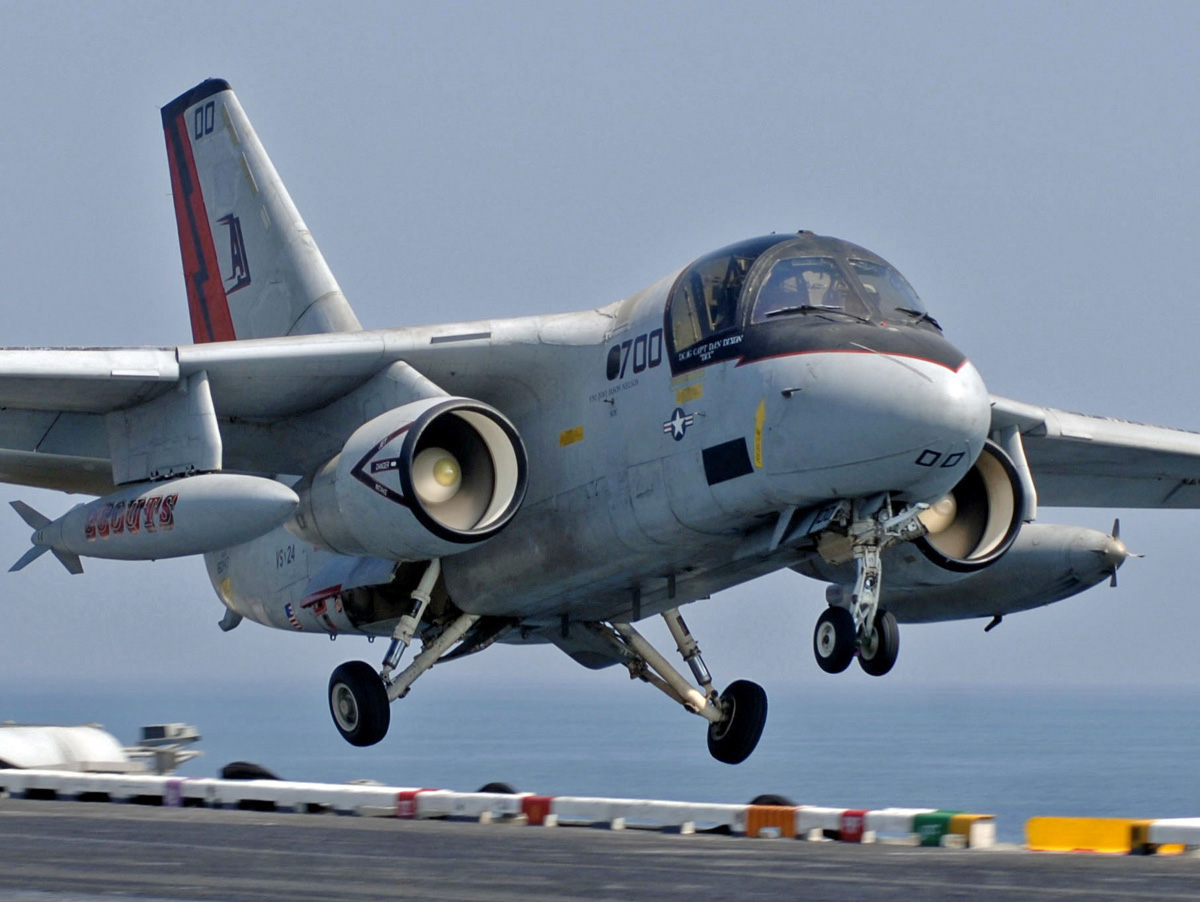 The keynote speaker at the ceremony, Vice Adm. David Architzel, principal military deputy to the Assistant Secretary of the Navy for Research, Development, and Acquisition and a former S-3 pilot with more than 3,400 hours in the aircraft, succinctly summed up the Viking's career: "The S-3 stayed in the fight for almost four decades."

The Navy began what became the S-3 Viking program in 1964 to replace the piston-powered S-2 Tracker. Known originally as VSX—for "carrier-based antisubmarine warfare aircraft-X" — a formal request for proposal was issued in April 1968. A joint General Dynamics-Grumman team and the then-Lockheed Aircraft Corp. were chosen from among the competitors to refine their proposals.

Although Lockheed had four decades of land-based antisubmarine warfare experience dating back to the World War II-era Hudson, the company had only built one carrier-based aircraft to that point, the T2V-1 SeaStar trainer. To build a strong Navy-oriented team, Lockheed first brought on LTV Aerospace, formerly Vought, with its long history in carrier aviation, as a partner. Then the Federal Systems Division of Sperry Rand was added to develop the aircraft's computerized acoustic detection system, a first for an airborne antisubmarine warfare platform.

The Lockheed team was declared the winner of the VSX competition on 4 August 1969. One of several speakers at the 2009 retirement ceremony was current Lockheed Martin F-35 Executive Vice President Tom Burbage, who flew the Viking as a Navy test pilot and later ran the S-3 program for the company. He noted that "the S-3 was a unique program. We went from first contract to first contact over a sub-marine in just three years."

Rollout of the first aircraft came at Lockheed's plant in Burbank, California, on 8 November 1971, a specific date that had been agreed to when the development contract was signed. Jane McClellan, wife of Navy Bureau of Aeronautics head Rear Adm. T. R. McClellan, christened the aircraft with champagne and bestowed the aircraft's official nickname — Viking, the winning entry in a Navy and contractor name-the-plane contest. But because the aircraft's GE TF34 turbofan engines sound much like a very large vacuum cleaner, crews were very soon calling the S-3 by its unofficial and more widely used nickname — Hoover.

After the rollout, the first of eight YS-3A flight test aircraft was trucked from Burbank to the company's facility in Palmdale, California, for first flight. Company pilots John Christiansen and Lyle Schaefer made the ninety-minute maiden sortie on 21 January 1972.

On 23 August 1972, a test crew tracked a submerged US submarine for the first time in an exercise off the California coast near San Diego. The first S-3 trap, or carrier landing, came aboard the USS Forrestal (CV-59) on 26 November 1973.

After the twenty-six month test program, Sea Control Squadron 41 (VS-41), the S-3 training unit, received its first aircraft on 20 February 1974, another contract-specific date. The Shamrocks, based at NAS North Island, San Diego, California, would serve as the Viking Replacement Air Group until the unit was decommissioned in July 2006, completing 347,000 flight hours with more than 48,000 traps and training more than 35,000 personnel.

Sea Control Squadron 29 (VS-29), known as the Dragonfires, made the first S-3 deployment aboard the USS John F. Kennedy (CVN-67) in July 1975. The S-3 fleet surpassed 100,000 flight hours less than two years after that first deployment.

A total of 187 S-3As — eight test and 179 operational aircraft — were built between 1971 and 1978. Over its career, the Viking would serve with eighteen Navy squadrons. Operational aircraft were homeported at North Island on the West Coast and first at NAS Cecil Field and then later at NAS Jacksonville, Florida, on the East Coast. All total, the Viking fleet accumulated approximately 1.7 million flight hours.

The Viking became known as the Swiss Army Knife of Naval Aviation, for its ability to carry out a range of missions for the Navy, including antisubmarine warfare, antisurface warfare, carrier onboard delivery, electronic surveillance, tanking, and over-the-horizon targeting.

In late 2008, to respond to an urgent Department of Defense tasking, four Vikings from VS-22 equipped with Low Altitude Navigation Targeting Infrared for Night, or LANTIRN, navigation pods were deployed to Al Asad AB, Iraq, to fill a critical need for additional intelligence, surveillance, and reconnaissance assets in theater.

Several variants of the S-3 were developed. Seven aircraft were modified as US-3A Carrier Onboard Delivery aircraft, capable of carrying 4,250 pounds of cargo. The US-3 was first flown in 1976, and the type served until the early 1990s. Development of a dedicated KS-3A tanker variant began in 1979. Although the KS-3 was never produced, it did prove the concept of buddy tanking, or aerial refueling using a wing-mounted pod, a task which most S-3s later performed.

The significantly improved S-3B was developed in the early 1980s to better detect quiet Soviet submarines, identify targets, and carry standoff weapons. The S-3B prototype was flown for the first time in September 1984. A total of 119 S-3As were upgraded to the S-3B configuration between 1987 and 1994. The modification work took place at Cecil Field and at North Island.

After a series of fatal accidents, the Navy's obsolete carrier-based EA-3B electronic warfare aircraft was withdrawn from service in 1987. The Viking was chosen to be its replacement. Fitted with a ventral faring, three radomes, and more than fifty antennas, an aerodynamic prototype of the ES-3A Shadow was first flown in 1989. The first operational aircraft was flown in 1991. Fifteen more aircraft would be modified at Cecil Field by 1994. Despite outstanding results, high maintenance costs and the prospect of a major avionics upgrade led the Navy to withdraw the Shadow from service in 1999.

Spears At The Ready

The Viking went to war in 1990. During Operation Desert Shield-Desert Storm, Viking crews flew many hundreds of armed surface reconnaissance, electronic surveillance, and overland support missions. The Hoovers were also used to bring the massive daily Air Tasking Orders in printed form to the fleet from US command in Riyadh, Saudi Arabia. Using buddy tanking, S-3s from seven squadrons transferred more than fifteen million gallons of fuel to Coalition aircraft over seven months.

The S-3 went to war a second time during Operation Iraqi Freedom, again performing a variety of missions and joining the digital age. At the top of the mission list was refueling. During major combat operations in 2003, Viking crews transferred nearly nine million pounds of fuel to Coalition aircraft.

Two other OIF highlights stand out. A VS-29 aircraft was equipped with the Surveillance System Upgrade, or SSU, a one-of-a-kind, computerized, carrier-based intelligence gathering asset. The SSU had the capability to stream real-time video from a camera or from the aircraft's synthetic aperture radar to the ship or to a unique mobile ground station. With a range of more than 150 miles, SSU quickly became the primary choice for aerial surveillance in theater.

The Viking had toiled in relative anonymity for most of its career. That changed on 26 March 2003, when an S-3B crew from VS-38, the world famous Red Griffins, carried out the first-ever S-3 attack mission, disabling Saddam Hussein's ocean-going yacht with a laser-guided AGM-65E Maverick missile. For a brief period, the Viking became a media darling. As one pilot put it, "Nobody had ever heard of an S-3 before that."

On 1 May 2003, the S-3 made world headlines as President George W. Bush flew out to the USS Abraham Lincoln (CVN-72) in a VS-35 Viking to make a televised address. This marked the first time any Navy aircraft had carried the Navy One radio call sign, and the first time a sitting president had trapped aboard a carrier at sea.

Under the S-3 Integrated Maintenance Program, or IMP, Lockheed Martin and Navy personnel worked side-by-side to perform scheduled depot maintenance and repairs to return the Vikings rapidly to the operational fleet. This highly successful program ran from 2001 until 2007. A total of 149 aircraft were cycled through the program.

IMP began in 2001 primarily as a means of reducing the backlog at the Naval Aviation Depots. Instead of a Viking being out of service for nine months while it went through a full depot-level teardown and reassembly, IMP broke the required inspections and maintenance tasks into three forty-eight day periods spread over five years. IMP increased S-3 aircraft availability by eighteen percent, reduced maintenance tasking by forty-seven percent over the previous depot-level maintenance plan, and resulted in significantly reduced costs to the Navy.

In 2004, the Navy made the decision to draw down the number of aircraft types on its carrier decks to save costs and to increase the efficiency of the carrier air wings. The F-14 Tomcat fleet air defense fighter was already being retired, and the determination was made that the S-3 would be retired as well.

Under the drawdown plan, the S-3 squadrons at NAS North Island were decommissioned first, starting with VS-29 in 2004. Sea Control Wing, US Pacific Fleet was disestablished in August 2005, closing out West Coast Viking operations.

The last S-3 carrier deployment was completed on 15 December 2007. Although it was an Atlantic Fleet squadron, VS-32, known as the Maulers, completed the deployment in the Western Pacific on the USS Enterprise (CVN-65).

On 28 May 2008, a crew from VS-22 made the last S-3 catapult launch, taking off from the USS George Washington (CVN-73). VS-22 was aboard the Washington to assist with carrier qualifications and flight deck certification in preparation for the ship's homeport change to Yokosuka, Japan. The very last Viking at-sea deployment ended the next day when the aircraft returned to NAS Jacksonville. VS-22 also completed the last-ever S-3 deployment when the squadron was sent to Iraq later that summer. The squadron's return to NAS Jacksonville came in December 2008. The Checkmates were disestablished the day before the Viking itself was retired in January.

Although the S-3 airframes have considerable useful service life left, most of the Vikings have been retired to the 309th Aerospace Maintenance and Regeneration Group—the Boneyard—at Davis-Monthan AFB, Tucson, Arizona. A handful of aircraft now serve as gate guards at bases. Some of the Hoovers have been placed in museums.

But a few Vikings will live on. The NASA Glenn Research Center near Cleveland, Ohio, has four S-3Bs that have been modified and are being used for icing research missions. Four other Vikings are expected to remain in Navy service to support armament development testing at Point Mugu, California.

"Today is about beginnings, not endings," Architzel said at the Atlantic Fleet S-3 wing disestablishment ceremony. "We recognize the impact this community has had, and the impact it will have. What was learned in the S-3 will pave the way for the future of naval aviation."

Early History Of The U-2 Dragon Lady
15 February 2002
The U-2 reconnaissance aircraft, though designed and developed in great secrecy in the 1950s, has somehow never fully emerged from the shadows even though it has outlasted one successor, the SR-71 Blackbird.

History Of Naval Aviation: First 100 Years
8 November 2011
An overview history of Lockheed Martin and legacy company aircraft flown by the US sea services.