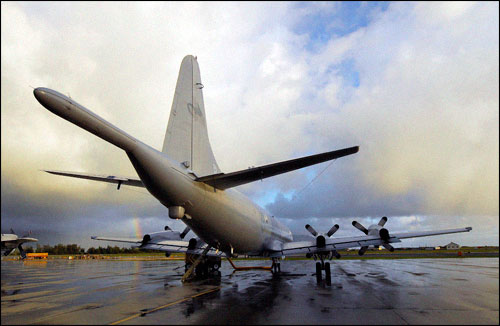 One of the first things visitors notice at RAAF Edinburgh is the digital clocks. Hanging in the 10 and 11 Squadron buildings, in the 92 Wing headquarters, in the simulator, in the maintenance hangar, and even in the life support equipment workroom, the clocks at the Royal Australian Air Force's AP-3C Orion base north of Adelaide display not only the local and Greenwich Mean Time—a standard at any military base—but also the hour at the wing's deployed location in the Middle East Area of Operations, or MEAO.

The clocks are an apt symbol for the current dual mission tasking for the RAAF Orion crews.

"The traditional roles for us are antisubmarine warfare, antisurface warfare, surveillance, search and rescue, and any other national tasking that might come up," says Wing Commander Warren McDonald, the 11 Squadron commander. "We have a detachment operating from Butterworth, Malaysia, for Operation Gateway, which is ship and nautical traffic surveillance in the Indian Ocean. Operation Resolute is run from RAAF Darwin in the north of Australia. That mission includes border protection, monitoring fishing vessels, and watching for illegal immigration into Australia. Those are all natural taskings for us."

But since 2003, 92 Wing has had an additional mission. "Now, we also perform overland intelligence, surveillance, and reconnaissance missions in Iraq as part of Operation Catalyst," McDonald continues. "Our role there is surveillance and to provide feedback to the commander on the ground. This is a very nontraditional role for us, but we made the shift very quickly. Our Orions are very flexible."

Wing crews currently fly about 7,000 to 8,000 hours a year, with close to thirty percent of that total coming from operations in the Middle East. "We used to participate in a lot of exercises because we were more oriented toward training," explains McDonald. "Now we focus on operations and on providing capability to the Australian Defence Force, specifically operations in the Middle East. We have a heavy tasking to meet, but it is sustainable."

Many former 10 and 11 Squadron and 92 Wing commanders, past crews, maintainers, and their families all gathered at RAAF Edinburgh in May 2008 to celebrate the fortieth anniversary of the P-3 entering RAAF service.

Australia became the second international P-3 operator in January 1968 when the first of ten heavyweight P-3Bs was delivered to replace the RAAF's aging P2V-5F Neptune fleet. The delivery flight was short, as the aircraft was only flown up the California coast from the then-Lockheed Aircraft Company facility in Burbank to NAS Moffett Field near San Jose. The initial cadre of personnel from Australia's 11 Squadron had already temporarily relocated at Moffett to begin P-3 transition training with the US Navy.

In 1978, Australia became the first operator to join the US in flying the updated P-3C, receiving ten new Orions to replace the SP-2H Neptune then in service with 10 Squadron. Two years later, after studying a potential upgrade program for its existing P-3Bs, the Australian government decided the more cost-effective approach was to order an additional ten P-3Cs and standardize its fleet. The first of these new aircraft was delivered to RAAF Edinburgh in 1984.

The RAAF initiated a multiphase program, designated Project Air 5276, in 1995 to upgrade the radar and infrared sensors and enhance the acoustic suite—needed for antisubmarine warfare—on the fleet of nineteen operational Orions. Another aim of the program was to extend aircraft service life through the fleet's planned retirement, now scheduled for 2018. Once the modifications were made, the aircraft were redesignated AP-3C for Australian P-3C. "The AP-3C is an entirely different aircraft now," McDonald notes.

In addition, the RAAF recently started an additional upgrade effort for the aircraft called the Capability Assurance Program, or CAP. "These upgrades substantially increase capability for the AP-3C on top of what it already has," notes McDonald. "We have an electro-optical capability, an infrared detection system, and an upgraded radar. The electronic support measures system is very capable. We have a further upgrade to the acoustic system. The mission system is great. The crew situational awareness has gone from looking at a green blob on the radar to looking at an image that requires no interpretation." CAP will also add common datalinks and replacement video recorders by 2011.

Still other enhancements came with operations in the MEAO. "We added electronic warfare self-protection measures for the Middle East," notes McDonald. "We've upgraded communications, which is the key to success over there. We now have two HF radios, one SATCOM, two VHF, and three UHF radios. It's quite a good comms kit."

Project Air 5276 also originally included the purchase of three former US Navy P-3Bs to be modified for aircrew training. Later changes to the project resulted in only one aircraft being modified, and that aircraft, redesignated TAP-3, has since been retired. The final part of Project Air 5276 is a new advanced operational mission system simulator that is up and running on base at Edinburgh.

Australia is an island continent roughly the size of the United States with more than 12,000 miles of coastline and territorial waters that cover close to 2.4 million square miles, ranging from the western Pacific to the east; south to near Antarctica; west into the Indian Ocean; and north to Indonesia, Malaysia, and Singapore. "Being at a base on the southern tip of the country puts us in a central location," McDonald observes. "We're equally distant from the Navy's fleet bases on the east and west coasts and RAAF Darwin to the north."

Much like the AP-3Cs, RAAF Edinburgh will be upgraded and expanded as well, with 92 Wing getting new hardstands, a new taxiway, and a new passenger/cargo terminal. An Australian Army battalion will also be located there. "We are going to build on a green field site with new hangars for the aircraft and other new facilities, including new crew facilities to replace the original 10 and 11 Squadron buildings," notes McDonald.

The RAAF AP-3C training unit is 292 Squadron. Equivalent to a Replacement Air Group in the US Navy, 292 Squadron, using aircraft loaned from 10 and 11 Squadrons, also conducts ab initio aircrew training and maintenance training.

"The major user of the simulator is 292 Squadron, but we also get line crews coming in," says Richard Balfourth, simulator manager. "This sim is miles ahead of what we used to have. It is much more like the real aircraft." Some of the equipment in the simulator is taken directly off the aircraft, and some of the equipment is replicated in the sim. Radar images are simulated while the electronic support measures signals shown to students are computer-generated.

Simulator runs are generally split between the aircrew and the mission crew in the back of the aircraft, although full-crew familiarization missions are also possible. "Those new to the squadron get a mix of the simulator and actual experience in the aircraft. Navigators get a couple of flights here before they go on the aircraft," Balfour adds.

Like Orion crews all over the world, the RAAF has hard crews—the same thirteen crewmembers fly with each other all the time. The simulator is also a valuable tool in helping the six assigned aircrews in both 10 and 11 Squadrons mentally and operationally make the shift from missions over water to missions over land, and back again.

Over-water operations are an Orion squadron's bread and butter. "We have operations with the US Navy mainly through exercises," McDonald notes. "While 11 Squadron was in the Middle East earlier this year, 10 Squadron participated in the multinational Rim of the Pacific exercise. We sent crews to a maritime exercise in Japan. We perform a lot of operations with the South Pacific island nations. We regularly have crews fly Operation Solania missions, where they monitor tuna fishing in and around the economic exclusion zones for South Pacific island nations."

Two AP-3Cs, two crews, and approximately thirty-five maintainers along with support personnel are assigned to the MEAO at one time, with 10 and 11 Squadrons alternating three-month deployments. "We are the ground commander's eyes from above," says McDonald. "We have a target deck, and we look to see if there are any changes. We have a tactical communications datalink that we keep on the aircraft in theater. That datalink is a much sought-after capability."

A small number of Air Combat Officers, the RAAF's general heading for navigators, tactical coordinators, or sensor operators, have now been trained as Air Liaison Officers, or ALOs. "Our interaction with the Army, and occasionally with the US Marine Corps, has taken on a new form," McDonald adds. "We just used to look at each other over the fence. Now, we work the ALOs up on communications, the same as they do on the aircraft, and get them up to speed on Army-speak. The ALOs are a new capability, but having them can further enhance operations."

Keeping the aircraft's specialized equipment, such as the laser rangefinder, enhanced electro-optical sensors, or the laser illuminator, cool is not an issue at altitude. But during preflight, the maintenance crew has to wear ice vests. "We can't get around the heat there," observed one crewmember.

"We perform maintenance on the aircraft as soon as it gets back from a mission," says Sgt. Derek Field, an 11 Squadron maintenance supervisor. "Both the interior and the exterior temperatures of the aircraft are cooler then. Sometimes the ambient temperature will be 30 degrees C (86 degrees F) overnight and up to 42 to 47 degrees C (107 to 116 degrees F) during the day. We have to wear horse riding gloves, thin leather with mesh on the top, to keep from getting burned."

On a deployment, the maintainers work twelve-hour shifts on a two-shift operation. "We work four or five days straight and then get two or three days off," notes Field. "The whole idea is to keep two aircraft flyable. We try to keep one aircraft flying and one ready to go. We get in a groove over there—twelve hours on, twelve hours off. We sleep, eat, and hit the gym. It's like the movie Groundhog Day.

"Our government has made a commitment to operations in the Middle East. What we have done there is a testament to the flexibility of the aircraft, our crews, and our maintainers," McDonald notes. "I've presented 200 medals in the year since I've been commander of this squadron. The RAAF rarely gave out medals before. But we now work in an operational environment."

Like the clocks on the walls at RAAF Edinburgh, the Australian Orions will continue to work for some time. "Project Air 7000 is a P-3 replacement program. The RAAF is looking at a Maritime Unmanned Aerial System as a first step. The second phase will likely be a new manned aircraft," concludes McDonald. "But we'll keep the AP-3s flying. They will be important through the next decade."

Early History Of The U-2 Dragon Lady
15 February 2002
The U-2 reconnaissance aircraft, though designed and developed in great secrecy in the 1950s, has somehow never fully emerged from the shadows even though it has outlasted one successor, the SR-71 Blackbird.

Tweak My Ride
7 March 2012
Straightforward improvements to the C-130, P-3, and C-5 such as winglets, microvanes, and other methods to reduce drag should equate to big fuel savings.

History Of Naval Aviation: First 100 Years
8 November 2011
An overview history of Lockheed Martin and legacy company aircraft flown by the US sea services.