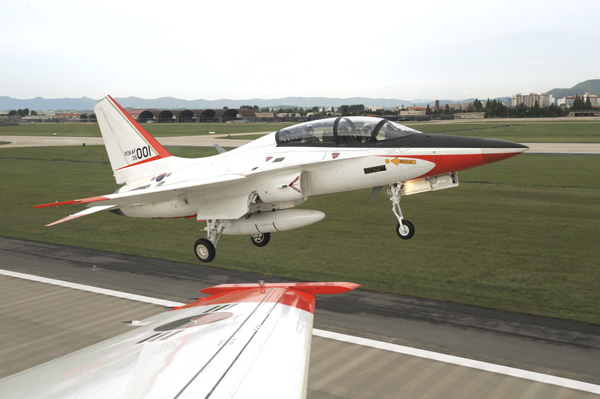 The patch of the Republic of Korea Air Force's 1st Fighter Wing features a hand giving a thumbs-up. The caption reads, "First and Best." That label aptly applies to the operations of the wing's 203rd Squadron, the world's first T-50 Golden Eagle training unit.

The 1st Fighter Wing is located 160 miles south of Seoul in Gwangju near the southwestern tip of the Korean peninsula. Gwangju AB, which shares its runway with the city's commercial airport, is also home to the 206 Fighter Squadron, which flies the F-5E/F Tiger II fighter.

"As the home of the first T-50 training squadron, the 1st Fighter Wing is devoting much of its energy to the integration of the Golden Eagle," explains Brig. Gen. Oh Sung Kwon, commander of the 1st Fighter Wing. "As soon as the integration is complete, we will concentrate on refining the training syllabus to get the most out of the T-50 and its associated ground training systems. We expect to establish Gwangju Air Base as the premier location for cultivating ROKAF fighter pilots."

The wing's distinction as the first operational T-50 training unit draws international attention. "We have received many visitors," notes Kwon. "This week we are hosting a group of military attachés representing the air forces of nineteen other countries."

Visitors see a training operation in full swing. Twenty T-50s populate the ramps and shelters at the 203rd, with one new aircraft arriving every month from Korea Aerospace Industries, or KAI, the prime contractor. The wing expects to have two training squadrons flying a total of fifty Golden Eagles by 2009.

Such progress is impressive considering the 203rd was established at Gwangju in June 2005 with eight pilots who had never flown a T-50. The first two T-50s arrived at the base the following December. Two pilots chosen from the initial eight were sent to Sacheon where the T-50 is manufactured. There the pilots received their ground and flight training simultaneously from ROKAF test pilots. These first two pilots trained the other six initial instructors at Gwangju.

"Our progress is quick, but it is also deliberate," says Lt. Col. Bo-Hyun Kim, commander of the 203rd. "We will realize the full potential of the T-50 as we gain more experience operating it. We already have a sense that the effectiveness of the T-50 simulators is very high. The flight characteristics of the T-50 allow students to adapt to flying the trainer more easily than they adapt to flying other trainers in the ROKAF. This effectiveness will allow us to use flight hours for more advanced concepts. Eventually, we will provide operational squadrons with pilots who are better prepared to transition to our front-line fighters, such as the KF-16 and the F-15K."

The ROKAF, like many air forces around the world, uses a wide variety of aircraft to train its fighter pilots. Students progress from the prop-driven Cessna T-41 Mescalero, to the subsonic jet-powered Cessna T-37 Tweet, and then to the supersonic Northrop T-38 Talon and the subsonic BAE Systems Hawk Mk 67. The students then proceed to combat readiness training with the F-5 before finally entering the operational units. Nearly all of these training aircraft are very old.

Fighter pilot training in Korea is in transition as the ROKAF replaces all those training aircraft. After passing a screening test with the T-103 (ROKAF version of the Ilyushin IL-103), ROKAF students are to be trained only with two trainers—the KT-1 and the T-50. Reducing the number of aircraft used in a training fleet simplifies logistics and support and lowers cost. However, the savings are not strictly related to the elimination of aircraft types. The number of training levels can be reduced. "Before the T-50, we had three levels of training—basic, intermediate, and advanced," explains Kwon. "The KT-1 and T-50 allow us to reduce training to two levels—basic and advanced."

The ground training systems play an essential part in these improvements. "While the T-50 is an impressive trainer, a visit to our integrated training center shows visitors that the aircraft itself is only a part of a larger training system," Kwon adds.

The ground portions of the T-50 training system are contained in the silver, two-story T-50 integrated training center, the newest building at Gwangju AB. Lecture halls are wired for computer-aided instruction. Student pilots as well as student maintenance personnel work on individualized lessons at their own pace on computer-based training systems. These same systems also track the training performance of the students.

Student pilots fly the T-50 in two types of simulators: an operational flight trainer and a full mission trainer. The former, used primarily as a procedures trainer, has a full cockpit and a large five-panel display. The latter is a full dome simulator used for training an entire flight. Student performance is monitored on both simulators from a control room that features a desktop version of the cockpit. Without ever having to leave the ground, student pilots learn to operate the T-50 from engine start-up to engine shutdown.

Capt. Young-Rock Ahn, an instructor pilot with the 203rd, touches his index finger on an image of the throttle quadrant on one of the screens. The image expands and shows minute throttle movements being made by the student pilot in the dome next door. "The system is very easy to learn because it's so intuitive," he says. Ahn presses another part of the display and types some numbers on his keyboard. "I just added a twenty-five-knot crosswind into Lieutenant Song's landing practice," he says with a slight grin.

Lt. Seung-Hwan Song, in the full mission trainer next door, deals appropriately with the sudden wind shift and executes a perfect touch and go. Ahn, Song's instructor for this flight, congratulates him over the intercom, "Good job."

Instructors can change more than wind direction. They can add storms, turn day into night, and introduce malfunctions and emergencies. Additional aircraft can be simulated in various scenarios. The simulators can also be connected over a network to practice formation flying or basic fighter maneuvering.

"The T-50 moves training into the digital age," says Colonel Kim, who has pilot instruction experience in both the F-16 and the T-37. "The system prepares students better for fourth- and fifth-generation fighters."

The squadron commander points to the advanced debriefing system as another example of the T-50's advantages. "Our T-38s don't have such a system," he says, "so pilots have to rely on their memories of the training flight for debriefing. The T-50, on the other hand, records every aspect of a training flight," continues Kim. "We can see everything that happened during a training flight. We can replay an entire flight during debriefing, pause it, view it from many perspectives, and archive it. We can get much more out of every mission. Our ground training and flight training systems and our logistics system are all interconnected, which allows us to work and train much more efficiently."

Instructor pilots at the 203rd can attest to the effectiveness of this approach. "Some student pilots have landed the T-50 on their first try with no direct flight control input from the instructor in the back seat," explains Maj. Sung-Hoon Kim, the senior instructor pilot in the 203rd with 250 hours in the T-50. "Landing without any assistance on a first try never happens in our other trainers."

Major Kim credits realistic simulators and the basic handling qualities of the T-50 as the reasons for such quick learning. "It's an easy aircraft to land," he says. "It was designed that way."

The digital nature of the simulator and the T-50 controls makes both more suited for training pilots to fly modern fighters. "Our current generation of student pilots and our newest instructors were brought up on video games," explains Major Kim. "Training in the simulator makes flight controls seem more like a video game. The various systems on the T-50 are then easier to teach and easier to learn because the T-50 has digital controls. The transition to operational squadrons is also easier because the latest generations of fighters are digital as well."

Lt. Joong-Beom Bae is one of a handful of ROKAF student pilots who flew the T-50 on its first training sortie at Gwangju on 17 April 2007. "My most vivid memories were the speed of the aircraft and the technology in the cockpit," he recalls. "The simulator and ground training prepared me well for the first flight, even though being in an actual aircraft is always different."

Bae says the biggest differences he noticed during flight were the sensations of motion of the T-50 in flight, the voice from the instructor in the back seat, and the chatter of radio traffic from the controllers. "The environment in the cockpit was not quite as calm as in a simulator where we don't deal with other flights," he says. "Overall, the transition to my first actual flight was quite easy."

That first flight is not a back-seat familiarization flight. Students fly the aircraft from the front seat where they are at the controls for the entire flight, including during takeoff and landing. "Of course, the instructor in the back seat is prepared to take over if necessary," notes Major Kim. "We've heard some concerns about the jump of going from the KT-1 to the T-50," he continues, "but our first two classes of student pilots have had no problems with the transition. First and subsequent flights have gone very smoothly. The T-50 performs as an excellent training platform."

While the 203rd and its new T-50s may be the center of attention for the ROKAF, the success the unit is experiencing with the new aircraft and training systems is not the result of special treatment. "The initial students were not handpicked from the flight academy," notes Colonel Kim. "They were selected at random from all skill levels of the potential pool of students. We didn't want to handpick the initial students because doing so would skew our evaluation of this new training concept the T-50 represents."

"Our students are proud to be the first to train in the T-50," says Colonel Kim. "They realize they are making history here at the 203rd. They are also proud because the T-50 was developed and produced by Korea. Lockheed Martin and KAI did an excellent job with this airplane. We are excited to be the first to benefit from it. As the patch says, 'The first and the best.' "

T-50 Program Milestones
14 February 2010
The T-50 was designed and developed to replace the T-38 and to train pilots to fly fifth generation fighters.

T-50 Program In Full Swing
26 September 2011
Ten years after the first T-50 rolled out the KAI factory in Sacheon, the program has radically improved the way fighter pilots are trained in Korea.

T-50 Flown By ROKAF Black Eagles
14 September 2011
The aerial demonstration team of the Republic of Korea Air Force, the Black Eagles, traded its standard-issue orange and white T-50 trainers for glossy black, white, and yellow T-50Bs for its 2011 show season.

T-50 Triumphs
15 November 2005
KAI Delivers proclaims the caption beneath a large red and blue yin-yang of the Republic of Korea flag. This symbol, the Taeguk, dresses the ramp separating the production facility from the flight test hangars at Korea Aerospace Industries in Sach

Black Eagles Fly T-50
25 June 2010
The Black Eagles, the aerobatic team of the Republic of Korea Air Force, exchanged their A-37 light-attack aircraft for T-50 Golden Eagle supersonic trainers in 2009.