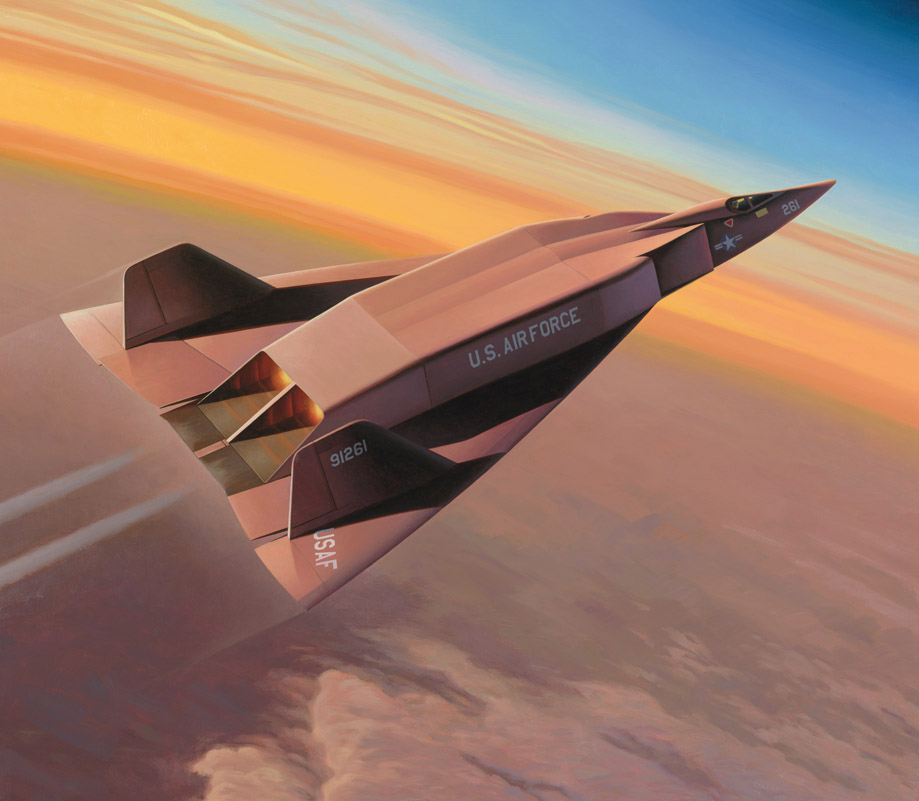 The need for more and better intelligence on Soviet military activities increased for the United States as Cold War tensions in the late 1950s heightened around the world. The resulting sense of urgency forced the CIA to take a more conventional and more practical approach for the design of a U-2 replacement. The agency, therefore, favored developed turbojet engine technology over undeveloped and riskier ramjet engines. Conventional takeoffs were favored over what was considered riskier and less reliable parasitic launching from a carrier aircraft.

The final requirements issued to Convair and Lockheed, the only two contractors competing for the highly secret contract, had three design stipulations: the aircraft had to be powered by turbojet engines only; it had to have a gross weight of approximately 100,000 pounds; and it had to be capable of taking off without a carrier aircraft. The requirements were defined, in large part, by the cancellation of the B-58B and radar cross section deficiencies in the Lockheed A-11 design.

Two of the final requirements ruled out the Convair FISH because the design relied on ramjet engines to achieve its Mach 4 cruising speed and a carrier aircraft based on the B-58 Hustler to attain the speed necessary to ignite the ramjets. As a result, Convair had to start from scratch to create an entirely new design in the few months allotted for submitting a final configuration.

All three requirements matched the Lockheed A-11 design, which was powered by two J58 turbojet engines, had a gross weight of approximately 92,000 pounds, and was capable of taking off on its own power. Lockheed could spend the limited time refining its design.

The evaluation of the competing designs was broken into four parts: Analysis and Design, Models and Components, Materials Research, and Subsystems. Analysis and Design addressed the feasibility of the configuration to meet the requirements for electronic effects and performance (in other words radar cross section); cruising speed, range, and other measures fundamental to a high-speed, high-altitude reconnaissance platform.

The companies were given slightly more than two months to submit final proposals.

Convair engineers borrowed heavily from the FISH design to create the initial configuration for Kingfish, though the borrowed features were difficult to discern in the illustrations submitted in their proposal. The starting design, designated Kingfish Lower, used the basic FISH planform and lower inlet. Configuration changes from this point were based primarily on radar cross section effects. The effects were measured on a test range with 1/8th-scale models.

As with Kingfish Lower, the other three starting configurations were categorized according to inlet placements. Smelt placed the inlets above the wing facing slightly upward and canting back. Herring placed the inlets above the wing facing slightly sideways and canting back. Kingfish Upper placed the FISH inlet on top of the fuselage. Each one of the four inlet approaches had its own issues in terms of radar cross section, design, and aerodynamics. However, Smelt and Herring showed the most promise. The final inlet configuration on the Kingfish design was a Smelt-Herring combination.

A detailed 7/10ths scale model of the final configuration was built for final radar cross section testing. The scale was chosen because it was almost identical in size to an existing full-scale model of FISH. Reworking the existing structure could be done faster and more affordably than building a full-scale model from scratch. The model was tested on a radar range near Indian Springs, Nevada.

Wing trailing and leading edges were constructed of notched steel panels with graphite-loaded pyroceram inserts to lower the radar reflection. Materials were much the same as used on the B-58. Steel honeycomb sandwich panels formed the fuselage structure, which was supported by bulkheads and longerons. The leading edges were approached similarly to those used for FISH since they would be exposed to temperatures up to 800 degrees Fahrenheit. The edges consisted of triangular panels of pyroceram held in place with steel ribs, with the flat edges of the pyroceram inserts forming the leading edge.

The aircraft was powered by two Pratt & Whitney JT11 afterburning turbojets located in the sides of the fuselage. A B-58 style escape capsule eliminated the need for the pilot to wear a pressure suit. In-flight refueling was provided by means of a receptacle on the upper surface of the nose. The landing gear was a conventional tricycle arrangement.

The design cruising speed and cruise altitude for Kingfish was Mach 3.2 at 85,000 feet. Maximum altitude was 98,300 feet. The mission profile was broken into three parts: an initial leg, tactical leg, and a final leg. The aircraft was to be aerial refueled by a KC-135 tanker before and after the tactical leg.

The initial leg began with a launch from bases in the continental United States. Takeoff speed was 138 knots. The aircraft required approximately 200 nautical miles to climb and accelerate to a speed of Mach 3.2. The Mach 3.2 speed was held constant to an altitude of 74,000 feet to optimize range. At 320 nautical miles from the first rendezvous point for the first refueling, the pilot would set the aircraft engines to idle and allow the aircraft to descend to 35,000 feet and decelerate to Mach 0.8. The mission profile allotted forty-five minutes of loiter time for the first aerial refueling.

Customer requirements designated an initial altitude of 85,000 feet and a maximum altitude consistent with a 4,000 nautical mile range for the tactical leg of the mission profile. The Kingfish pilot would reach the initial altitude and cruise there for 820 nautical miles and then initiate a cruise climb to the operational tactical altitude of 87,700 feet where the pilot would perform two ninety-degree turns to collect intelligence information and then head to a second rendezvous point for aerial refueling.

At 320 nautical miles from the second rendezvous point, the pilot would once again set the engines to idle and allow the aircraft to descend to 35,000 feet and decelerate to Mach 0.8 for the second aerial refueling before continuing on the final leg.

The pilot would accelerate to a speed of Mach 3.2 and climb to an altitude of 74,000 feet to complete the final leg. The aircraft would cruise at altitudes for best range to a point 375 nautical miles from the landing base. In preparation for landing, the aircraft would descend to 35,000 feet and decelerate to Mach 0.8. Loiter time at 35,000 feet on the return leg was set at thirty minutes. The landing speed was ninety-seven knots with fuel reserve equating to fifteen minutes of flying time at sea level.

A single engine failure was addressed as an emergency condition in the Convair report. In this condition, the thrust of the operating engine was increased to 108 percent of maximum power. Cruise range after an engine failure was 1,360 nautical miles calculated at the halfway point of the tactical leg of the mission.

While Convair engineers worked hurriedly to design Kingfish, Lockheed engineers concentrated on refining their Archangel design, taking A-11 to A-12. Their primary focus was to reduce the design’s radar cross section, which would come at the expense of maximum cruise altitude.

Lockheed replaced the single vertical tail with twin tails, each located above the engines. The tails were canted inwards fifteen degrees to reduce radar reflections from the side angle. For the same reason, sloping surfaces called chines were added to the sides of the fuselage and serrated edges incorporating radar treatment were added to the wings and to the chines. The engines were moved from under the wing to the middle of the wing.

The empty weight increased twenty-two percent to 43,645 pounds. The aircraft could carry 64,600 pounds of fuel. Takeoff gross weight was 110,000 pounds. The engines were fed by axisymmetric inlets instead of rectangular or two-dimensional inlets as used on the A-11 design. The axisymmetric inlets reduced radar cross section (namely reflections created by corners) and they could be blended in with the wing more easily. The inlet spikes that were used to control airflow also blocked the engine face from radar reflections. To reduce weight, the A-12 was constructed mostly of titanium alloy.

Convair and Lockheed submitted their proposals on 20 August 1959. While Kingfish offered better performance and a lower radar cross section, the A-12 was lower cost and lower risk and offered a greater operational range. Lockheed won the competition on 29 August with one stipulation — it had to prove its concept for reducing the A-12’s radar cross section, which Lockheed did by mid-January 1960. The contract for twelve A-12 aircraft was signed on 11 February 1960. The first unofficial flight of the first A-12 occurred on 25 April 1962 with Lockheed test pilot Lou Schalk at the controls. Schalk also made a gear down flight on 26 April and the first official flight, which came in front of government representatives, on 30 April.

Convair ended its efforts on the program in February 1960 after completing some additional studies and tests on two-dimensional exhaust nozzles. The company submitted its final report on Kingfish in October 1960. Three years later, Convair used FISH as a starting point for proposed designs of an A-12 replacement. These design studies, which dealt with a wide range of parasitic and self-launching aircraft with operational speeds up to Mach 9, lasted through 1965. They are subjects of the next and final article in this series.

Credits: Most information for this article was derived from the Convair final report for the Kingfish program that was released and made public in the late 1980s to support the National Aerospace Plane project. Details on the Lockheed Archangel designs came from a public presentation on the history of the Archangel program by John R. Whittenbury, who contributed several illustrations. Code One sends a special thanks to Paul Suhler, author of From Rainbow to Gusto: Stealth and the Design of the Lockheed Blackbird, for reviewing the article and for background information on the competition between Lockheed and Convair. Mr. Suhler’s book was published by AIAA in 2009 and is available on Amazon.com and AIAA.org. Code One also thanks Kevin Renshaw and Jay Miller for their technical reviews of this article.