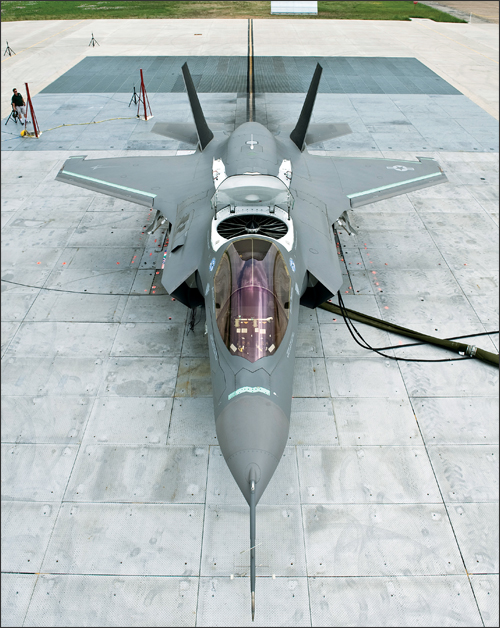 The F-35 hover pit may resemble an olympic-size swimming pool, but this specially instrumented test structure at the F-35 factory in Fort Worth, Texas, holds no water and is covered with interlocking metal grates that span its surface.

BF-1, the Lockheed Martin designation for the first F-35B short takeoff/vertical landing, or STOVL, variant of the Lightning II, is attached to the top of a restraint system that juts out above the metal grid. As BF-1's pilot pushes the engine to full power, a team of test engineers and technicians collects data to validate the performance of aircraft software and systems. The hover pit diverts the exhaust from the propulsion system away from the aircraft, enabling the F-35B to perform STOVL operations as if airborne.

The most recent round of tests, which were completed in April, verified installed thrust performance of the Pratt & Whitney F135 STOVL propulsion system on BF-1—all in preparation for the F-35's first vertical landing scheduled later this year.

Hover pit testing quantifies propulsion and flight control system performance. One of the major outcomes of pit testing is an accurate measurement of the thrust from the propulsion system and the engine. Pit testing also measures thrust from the lift fan. The results of the tests will not only allow the F-35B to obtain a STOVL-mode flight clearance, but will also provide increased levels of confidence in the vertical lift system during the initial phases of STOVL-mode flight testing.

Acquiring these results has taken planning, time, and analysis by a large group of F-35 teammates around the world.

Design, development, manufacture, build, pre-test, and testing of both the hover pit and the force and moment restraint system began five years ago. F-35 team partner BAE Systems developed the design of the actual pit using subscale wind tunnel models at its facility in Warton, UK, about 250 miles northwest of London.

"Hover pit testing is the only time engineers can measure and confirm the aircraft/engine interaction and the total system performance in a completely controlled setting," says Richard Hoggarth, lead STOVL aerodynamics engineer for BAE Systems.

A significant portion of the latest round of hover pit testing consisted of force and moment testing. During the test, forces generated by the propulsion system are precisely sensed by three load cells that substitute for the aircraft's landing gear tires. These cells measure forces in three axes. These force measurements are then resolved into forces that act along the thrust axes of the aircraft. Resulting pitch, roll, and yaw moments are then derived from this data.

The testing is specialized and required some adjustments to BF-1 before testing began. To prepare for the test, the aircraft was first taken to the hover pit where it was jacked up in the air to remove the wheels and brakes and to de-service and lock the landing gear. It was lifted by crane into the force and moment system. Special instrumentation added to the aircraft for the hover pit test collects external environment data created by the impact of the propulsion system exhaust on the lower surface of the aircraft. The instrumentation will be removed now that the hover testing is completed.

"Restraining the aircraft over the hover pit allows us to conduct specific testing that couldn't be conducted in flight," Hoggarth says. "This testing also enables us to validate various aircraft/STOVL models that have been developed over years of work, both powered and unpowered aerodynamics, propulsion, performance, and in-flight thrust."

During testing, the aircraft simulates actual operational maneuvers, such as short takeoffs and vertical takeoffs, while being locked to the ground. The pilot in the cockpit inputs all commands either by directly using the normal cockpit inceptors or by selecting the built-in software routines to execute more complex maneuvers that are difficult to repeat to a high degree of fidelity. During these maneuvers, engineers take measurements to confirm the control authority needed for the pilot to fly the aircraft successfully.

For the F-35B pilot, converting from conventional to STOVL mode will be no more complicated than pushing a STOVL conversion button. The same button on a conventional takeoff and landing F-35 (an F-35A or F-35C) lowers the tail hook. "The button initiates a magical transformation," says J.D. McFarlan, who leads the F-35 air vehicle development team.

This transformation, as McFarlan describes, includes the opening of all STOVL doors and the propulsion system preparing to engage the clutch. Once all doors are open, the clutch is engaged when sets of carbon plates are pressed together to spin the lift fan up from a complete stop to engine speed. Once the speeds between lift fan and engine are matched, a mechanical lock is engaged to remove the torque load from the clutch and permit operation to full lift fan power. After the lock engages, the propulsion system completes conversion to STOVL mode and responds to aircraft commands. The entire sequence takes approximately fifteen seconds.

When a pilot gets to a slow speed during STOVL mode, the sidestick is used to move the plane up or down. When the pilot's hands are removed from the controls, the airplane simply hovers in place.

"The conversion button sets a lot of things in motion," says Graham Tomlinson, a BAE Systems F-35 test pilot who participated in early test runs on the hover pit. "But the complexity is in the airplane and the propulsion system. Converting to STOVL, which is fully automated, is a smooth transition for the pilot."

Hover pit testing began in May 2008, during which time the aircraft operated at thirty percent power and converted to STOVL mode. All doors and nozzles were exercised during testing. The 2009 testing was more intense, focusing on force and moment testing, environmental testing, as well as on other types of tests. The most recent testing encompassed three segments of pit testing: open, partially plated, and fully plated pit testing.

In open pit testing, the surface below the airplane is grated so that all the emitted exhaust is directed down into the pit away from the airplane and deflected out the exhaust section. Most of the hover pit testing was accomplished with an open pit. Functional checkouts, system characterization, performance, Integrated Flight Propulsion Controls, and control authority were tested during hover pit testing. Test times were not limited because exhaust gases impinging on the aircraft were all ducted away by the hover pit.

In partially plated testing, a ground plane was placed directly beneath the aircraft's three-bearing swivel exhaust doors. The plane, which is instrumented with temperature sensors, measures heating characteristics where the main engine exhaust impinges on the surface beneath the aircraft. These data are used to characterize the heating effects of the engine's exhaust on whatever surface the aircraft is sitting on, be it runway, taxiway, or ship deck.

In fully plated testing, the entire pit is covered with steel plates to simulate a solid surface. In this configuration, external instrumentation is mounted to the aircraft to measure surface heating from plumes rebounding off the solid surface and hitting the aircraft in the same manner that would occur during a vertical landing. Arrays of acoustic and pressure rakes are arranged around the aircraft to measure sound levels and outwash from the jets. These data are used to characterize the environment around the aircraft to develop operating procedures for ship-based operations. Testing is conducted for short periods at full power to simulate aircraft heating during a vertical landing or vertical takeoff, or VTO. During a typical VTO, the aircraft is twenty feet off the ground within five seconds of requested thrust.

Fully and partially plated pit testing is associated with environmental testing, which has two primary objectives. The first objective is to define the working environment near the aircraft for the maintainers and operators (especially those on board a ship). Velocities, temperatures, and pressures of the exhaust plume are measured at various locations as it hits the ground and spreads outward. The second objective is to determine the effect of those exhaust plumes on such aircraft structure as the doors and the lower surfaces. Acoustic sensors placed on the underside of the aircraft collect environmental data.

Environmental data were not the only data collected during the latest round of hover pit testing. Engineers also conducted electromagnetic interference testing. These tests ensure that all the electronic equipment on the aircraft, especially communications equipment, is not affected by the operation of the STOVL propulsion system.

Hover pit tests have since revealed that the aircraft is meeting all thrust requirements, demonstrating more than 41,000 pounds of vertical thrust, an amount more than necessary for robust STOVL operations. Additionally, hover pit testing has demonstrated low-power and high-power engagements of the clutch that transfers power from the engine to the vertical lift fan. The testing has also captured critical performance data, such as inlet pressure recovery, pitching moment, rolling and yawing moment, effective vector angles of the exhaust, and control input response time.

"We have demonstrated with tremendous confidence that we will meet the hover requirements with this installed thrust capability," McFarlan continues. "We are confident we will meet our key performance parameter requirements for STOVL performance, and we will demonstrate those parameters this summer during the flight test program." The hover pit force and moment tests are used to demonstrate installed thrust capability; no more pit testing is required except for functional checkouts.

Flight test will demonstrate the F-35 has an integrated system that can land vertically with the required performance—known as vertical lift bringback. This demonstration involves flight control authority, installed propulsion performance, and aerodynamics—the complete package.

The lift fan provides almost half of the downward thrust needed for a pure hover mode. The fan's two sets of counter-rotating blades are driven by a driveshaft connected to the face of the main engine fan. A clutch at the forward end of the driveshaft engages the lift fan.

The lift fan is covered from above by an aft-hinged door, which opens as the aircraft transitions to hover mode. Thrust is controlled by the speed of the lift fan, a set of variable inlet guide vanes that reside above the rotating blades of the lift fan, and by a device called a variable area vane box nozzle on the lower side of the fan. The vane box nozzle (middle photo) contains a set of six vanes (or louvers) that direct and control the amount of downward thrust emanating from the lift fan.

Two roll posts (lower photo) together contribute about ten percent of the downward thrust. More importantly, they are used to control aircraft attitude in the roll axis. The posts are at the exit end of a duct that taps into the fan section of the main engine. Thrust for the posts comes from cooler air that normally bypasses the engine's turbine section. The exhaust areas of the two roll posts can be varied independently. The posts, therefore, control roll by expelling different amounts of thrust between the port and starboard sides of the aircraft.