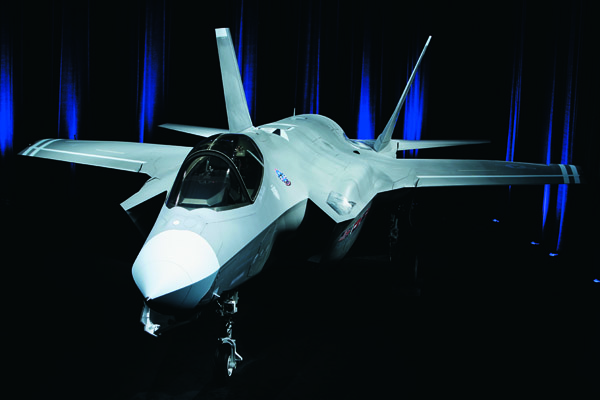 The first F-35 Joint Strike Fighter met the world to fanfare worthy of a rock star as more than 1,300 employees, dignitaries, partners, and guests witnessed the unveiling at Lockheed Martin in Fort Worth, Texas, on 7 July. Thousands more fans around the world viewed the unveiling via satellite.

"What we may have begun as a leap of faith fifty-six months ago is today the most sophisticated, affordable, international multirole fighter of the 21st century," noted Ralph D. Heath, president of Lockheed Martin Aeronautics Company. Among the dignitaries present for the event were members of the Texas Congressional delegation, including US Senators John Cornyn and Kay Bailey Hutchison and US Representative Kay Granger.

"Some of history's greatest aircraft have rolled out of this Fort Worth factory," said Hutchison. "Now we're adding one more to the list."

Added Cornyn, "This aircraft will revolutionize how we use air, Naval, and Marine forces."

Partners
The F-35 Joint Strike Fighter is a global partnership among nine nations — the United States, United Kingdom, Italy, Netherlands, Turkey, Canada, Australia, Denmark, and Norway. The stage seating offered a tangible presence of that international team as US defense industry officials flanked one side of the stage and heads of international defense ministries and members from the JSF team partners flanked the other side.

Granger recognized the partner nations playing a vital role with the United States. "It's certainly been a joint effort," she said. "We are proud our nation is standing shoulder to shoulder with eight partner countries from all over the world to act as one team. This partnership exemplifies the true success of the F-35."

After the speeches, the expansive backdrop screen recalled the milestones and progress made since the JSF downselect in October 2001. The pace quickened to the last slide: "The Future Begins ... Right Now." The backdrop fell to reveal the newly painted F-35 bathed in spotlights. Audience members rose to their feet, erupting in applause.

"I felt a sense of pride knowing that the aircraft has come a long way since it rolled out of the factory," said Jeff Endres, a systems engineer who viewed the ceremony through a live video feed in the company's auditorium. "It reminds me how involved our program is. I work on a small part of the program. Seeing the complete F-35 makes all the parts come together."

"To the men and women of Lockheed Martin who are making this program possible: You are awesome. Thank you for your work, and thank you for getting us to this point," said Moseley. "Today we collectively put the enemies of peace and freedom on notice. Today is the day those enemies have long feared — they know the introduction of this aircraft effectively ends their current defenses. They are left fully exposed to the decisive effects of air power — lethal and precise."

Moseley's remarks drew from the past while looking confidently to the future. "Today we name the aircraft after two great legacy aircraft, two great pieces of air power history. Tomorrow this Lightning II will make a name for itself," he said.

To The Future
With the fighter named, US Deputy Secretary of Defense Gordon England praised the program efforts made to date and encouraged dedication and hard work in the future. "The Joint Strike Fighter is a giant step forward for unity of effort and for meeting the security challenges of the 21st century," he said. "But a great deal of hard work still lies ahead.

"Today is a day of great hope and optimism," continued England. "Hope for success in this groundbreaking program, hope for ever-stronger international partnerships, hope for the prospects of freedom and liberty in more places around the world, and the true and well-founded hope that we will be able to leave a safer and better world for our children and grandchildren just as the heroes of World War II did for us."

The F-35 program is the largest aerospace defense program in US history. The single-engine F-35 will be manufactured in three versions: the F-35A conventional takeoff and landing, or CTOL, variant for the US Air Force; the F-35B short takeoff/vertical landing, or STOVL, version for the US Marine Corps and the Royal Air Force and Royal Navy; and the F-35C carrier version, or CV, for the US Navy.

Each F-35 version is approximately fourteen feet tall and fifty-two feet long. Wingspan for both the A and B models is thirty-five feet, while the F-35C wingspan is forty-three feet. The F-35, capable of speeds in excess of Mach 1.6, is powered by a single Pratt & Whitney F135 or GE Rolls-Royce Fighter Engine Team F136 engine. Both produce approximately 40,000 pounds of thrust in afterburner. The F-35 is the most powerful single-engine fighter ever built. The aircraft has a maximum gross weight of approximately 60,000 pounds.

Nominal armament will consist of two AIM-120 radar-guided air-to-air missiles and two precision-guided air-to-surface weapons internally with two additional air-to-air missiles and up to 15,000 pounds of ordnance on seven external hardpoints. The F-35A will have an internal 25 mm gun carried in a fairing on the aircraft's left shoulder, while the F-35B and F-35C will carry the 25 mm gun in a removable external pod. The F-35 is designed to replace aging fighter inventories, including US Air Force A-10s and early model F-16s, US Navy F/A-18A/Cs, US Marine Corps AV-8B Harriers and F/A-18A/C/Ds, and UK Harrier GR.7s and Sea Harriers.

The F-35 program is approximately five years into its twelve-plus year development phase. It is a cooperative development program in the system development and demonstration phase, or SDD, between the United States and eight international partners. SDD involves developing and testing the entire aircraft system, including manufacturing. During SDD, a total of twenty-three test aircraft will be built. Fifteen will undergo flight testing; seven will be used for ground test activities; and one will be used to evaluate the F-35's radar signature.

Current planned procurement of 2,581 F-35s by the United States (2,443 aircraft) and the United Kingdom (138) is basis for the airplane's estimated average unit cost of $45 million to $60 million, depending on the variant. Total projected partner procurement is approximately 745 aircraft, which includes UK procurement.