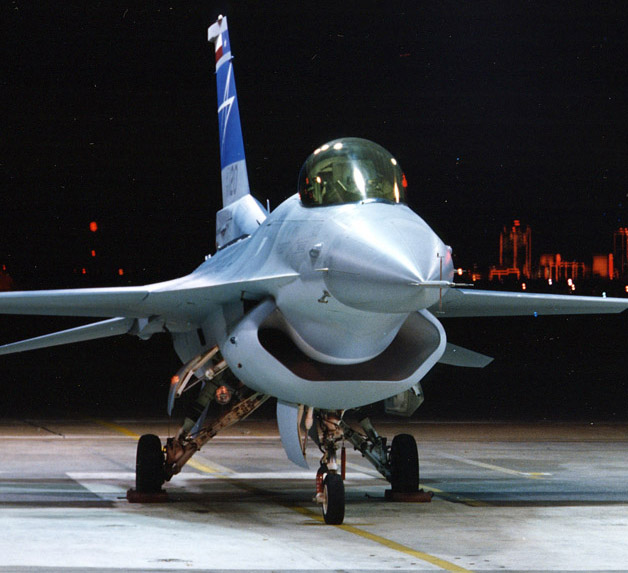 The unassuming fuselage bump at each inlet on the Lockheed Martin Joint Strike Fighter performs miracles that only aeronautical engineers can fully appreciate. At high aircraft speeds through supersonic, the bumps work with forward-swept inlet cowls to redirect unwanted boundary layer airflow away from the inlets, essentially doing the job of heavier, more complex, and more costly approaches used by current fighters.

The overall inlet design, called a diverterless supersonic inlet or DSI, moved from concept to reality when it was installed and flown on a Block 30 F-16 in a highly successful demonstration program. The flight test program consisted of twelve flights flown in nine days in December 1996. The first flight on 11 December addressed initial envelope clearance and functional checks. Subsequent flights addressed performance characteristics of the unique inlet design in both level and maneuvering flight. Rapid throttle transients during these flights confirmed the compatibility between the inlet and engine.

The flight tests covered the entire F-16 flight envelope and achieved a maximum speed of Mach 2.0. The modified aircraft demonstrated flying qualities similar to a normal production F-16 at all angles of attack and at all angles of sideslip. Lockheed Martin test pilots performed two inflight engine restarts and 164 successful afterburner lights, with no failures. Fifty-two afterburner lights were performed during hard maneuvers. No engine stalls or anomalies occurred during the test flights.

The new inlet showed slightly better subsonic specific excess power than a production inlet and that verified the overall system benefits of eliminating the diverter. Test pilots remarked that military power settings and thrust characteristics were very similar to standard production F-16 aircraft with the same General Electric F110-GE-129 engine. Considering the overall goal of the flight test program was to demonstrate the viability of this advanced inlet technology, the results were excellent.

Tactical aircraft pose a formidable challenge for inlet designers. A fighter inlet must provide an engine with high-quality airflow over a wide range of speeds, altitudes, and maneuvering conditions while accommodating the full range of engine airflow from idle to maximum military or afterburning power. The inlet designer must also consider the constraints imposed by configuration features, such as nose landing gears, weapon bays, equipment access panels, and forebody shaping. The design must produce the lowest drag, lowest weight, lowest cost, and highest propulsion performance. It must also meet stringent low observable requirements.

Historically, inlet complexity is a function of top speed for fighter aircraft. Higher Mach numbers require more sophisticated devices for compressing supersonic airflow to slow it down to subsonic levels before it reaches the face of the engine. (Jet engines are not designed to handle the shock waves associated with supersonic airflow.)

These compression schemes involve the conversion of the kinetic energy of the supersonic airstream into total pressure on the compressor face of the engine. Speeds over Mach 2 generally require more elaborate compression schemes. The F-15 inlet, for example, contains a series of movable compression ramps and doors controlled by software and elaborate mechanical systems. The ramps move to adjust the external and internal shape of the inlet to provide the optimum airflow to the engine at various aircraft speeds and angles of attack. Doors and ducting allow excess airflow to bypass the inlet.

Inlet designs for fighter aircraft must also account for a layer of low-energy air that forms on the surface of the fuselage at subsonic and supersonic speeds. (These layers also form on the inlet compression surfaces.) This layer of slow moving, turbulent air, called a boundary layer, can create chaos when disturbed by the shock waves created by the inlet. The result can be unwanted airflow distortions at the engine face. If the shock wave/boundary layer interaction is severe enough, the engine will stall. The boundary layer thickens with increased speed and increased forebody distance, the length from the nose of the airplane to the inlet itself.

The DSI traces its roots to work done by Lockheed Martin engineers in the early 1990s as part of an independent research and development project called the Advanced Propulsion Integration project. The concept was developed and refined with Lockheed Martin-proprietary computer modeling tools made possible by advances in Computational Fluid Dynamics, or CFD. CFD is the science of determining a numerical solution to the governing equations of fluid flow and advancing this solution through space or time to describe a complete flow field of interest—in this case, the flow field of a fighter forebody, inlet, and inlet duct.

CFD, considered a branch of fluid dynamics, provides a cost-effective means of simulating airflow. The development of more powerful computers has furthered CFD advances to the point that it has become the preferred means of evaluating aerodynamic designs.

Basic research of the inlet concept continued through the mid-1990s. Traditional wind tunnel testing of small plastic inlet models built with stereolithographic techniques augmented a CFD-based development process for the DSI. Engineers made enough technical advances during this period that two US patent applications were filed, one dealing with the overall design and the second dealing with the integration process of the new technology. (Both patents were granted in 1998.) The diverterless inlet designs built and tested with this combination of CFD and small-scale wind tunnel models formed a database of inlet configurations that would subsequently prove valuable to the Lockheed Martin JSF design.

The DSI flight-tested on the F-16 in 1996 was designed on computer workstations using three-dimensional solid models. It was developed with minimal airframe impacts and maximum use of existing hardware to reduce design and manufacturing costs. The F-16’s modular inlet design allowed development of a DSI-equipped inlet module without significant impacts to the aircraft forebody or center fuselage. As with the existing inlet design, the new inlet module formed part of the forward fuselage extending from the inlet leading edge to the interface between the forward fuselage and center fuselage. The compression surface was attached to the existing forward fuselage below the cockpit without affecting the rest of the forebody or the chine. New duct lines were developed to form a transition from the new inlet aperture to the existing duct.

The inlet module consisted of 300 parts, which included 113 machined parts and eighty-three formed skin panels. The bump, more accurately termed a fixed, three-dimensional compression surface, was formed from graphite epoxy at LM Aeronautics facilities in Palmdale, California. Most of the substructure consists of aluminum. The inlet module was built and installed at LM Aeronautics facilities in Fort Worth, where the flight tests took place.

The DSI concept was introduced into the JAST/JSF program as a trade study item in mid-1994. It was compared with a traditional "caret" style inlet. The trade studies involved additional CFD, testing, and weight and cost analyses. The new inlet earned its way into the JSF design after proving to be thirty percent lighter and showing lower production and maintenance costs over traditional inlets while still meeting all performance requirements.

The flight tests on the F-16 validated the aerodynamic properties of the inlet, which will be validated further on the upcoming flights of the Lockheed Martin JSF demonstrator aircraft in 2000. The flight test also proved that the analytical performance and inlet flow stability predictions from the CFD analysis matched operations in the real world. The JSF program further refined the production version of the DSI design using these CFD tools.

The DSI inlet used on the JSF has evolved through several design iterations. The shaft-driven lift fan on the STOVL JSF required the use of a bifurcated duct with one inlet on each side. The initial version was essentially the same design used on the lower surface of the F-16 rotated up onto either side of the JSF forward fuselage.

This design had a cowl that was symmetrical about the centerline of the bump. This version of the inlet appears on the X-35 demonstrator aircraft. Later CFD analysis and testing led to refinements of the design to improve its performance at high angles of attack by shifting the upper and lower cowl lips to take advantage of the side-mounted location and to improve high angle-of-attack performance. This later version has been fully tested in the wind tunnel and will be used on the EMD and on production aircraft.